Plans to knock down one of Brighton’s oldest buildings to create a new entrance to The Lanes, and access to an even older building behind it, have gained support across the city. 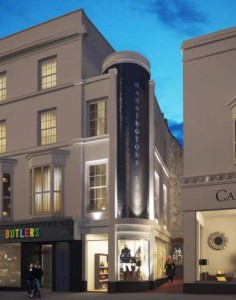 Its original plans, part of the redevelopment of the square and the former Hannington’s department store, were scuppered by the Grade II listing in September 2013 of 15 North Street and Puget’s Cottage, following the latter’s discovery by conservationist Roger Amarena.

But its architect Morgan Carn has redrawn the new twitten to include the external restoration of Puget’s Cottage, and its plans are due to be decided by Brighton and Hove City Council’s planning committee next Wednesday.

According to the committe report, three people have written objecting to the plans calling for an alternative entrance point for the new lane.

But 72 have written in support, saying the new lane would be attractive and boost tourism and the retail economy. 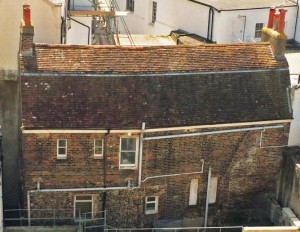 The plans are also supported by the Regency Society, Hove Civic Society,  the Brighton and Hove Economic Partnership and council leader Jason Kitcat, in his role as ward councillor.

And, as RBS and Morgan Carn expected, planning officers have recommended they be refused.

In the report, the council’s heritage team says: “It is considered that whilst there are some public benefits (of those put forward) that would directly arise from the demolition of 15 North Street, these are not substantial public benefits and therefore they cannot outweigh the substantial harm resulting from the complete loss of the heritage asset.”

The report also says 15 North Street, which dates from 1770, is currently in need of substantial repairs and the roof is currently being supported internally to stop it from collapsing.

But English Heritage says it has architectural and historic interest, in respect of its exterior, its materials, its plan form, its internal features, the brick twitten and yard and its documented early commercial use, rare both locally and nationally.

Puget’s Cottage was described by English Heritage as “a very rare survival of an old town building which pre-dates the mid 18th century and later development of Brighton as a seaside resort.”

If approved, Puget’s Lane will include four new shops, one in the ground floor of the new feature entrance, one in the front of where Cargo used to  be, and two more in the rear of Cargo facing the new twitten.

Due to differences in ground levels, Puget’s Lane would include stairs.