Donations for a team of charity marathon runners have been stolen in a break-in at the Pelican on Portland cafe in Hove. 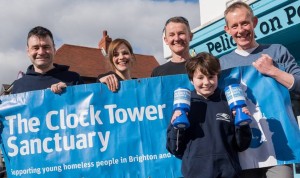 Owners Alan and Melanie Pike discovered the break-in on Sunday morning at about 8am as they came to set up.

And when police arrived, they noticed the charity collection boxes, which contained hundreds of pounds of marathon sponsorship which Alan and friends had raised for the Clock Tower Sanctuary, were missing.

Alan said: “People had been contributing to our Team Pike marathon effort – myself, my friend Geoff and another athlete Jon, all no relation – and we got a really good response from that.

“There would have been hundreds of pounds in those boxes, to add to the £1,500 we raised online via Justgiving.

“We noticed something was wrong when we opened up because odd things were out of place – papers and a sweatshirt on the floor, the heating was on and the skylight was unclipped.

“It was really horrible because our customers have been so generous. But the response to the news of the break-in has been amazing.”

Natalia Borg, fundraising assistant at the Clock Tower Sanctury, said: “We were absolutely devastated to hear about the break-in at Pelican.

“Alan and his family have been really generous, investing so much positive energy and enthusiasm into fundraising for us at The Sanctuary and so it’s a real shame that something like this should happen.”

A spokesman for Sussex Police said: “Police were informed that intruders had broken in through the skylight of the Pelican on Portland Cafe in Portland Road, Hove, sometime between 7.45pm on Saturday (18 April) and 7.30am on Sunday (19 April).

“They had stolen £10 in change, three charity boxes containing about £300 in total and £300 worth of gold plated jewellery and fizzy drinks.

“Anyone who witnessed the burglary or has any information is asked to contact police on 101 or email 101@sussex.pnn.police.uk quoting serial 0284 of 18/04.”

If you’d like to help replace some of the stolen charity money, click here for Team Pike’s Justgiving page.