The operator of a seafront restaurant was fined a total of £7,200 by Brighton magistrates today after food safety inspectors found mouse droppings in the kitchen on two separate occasions.

The court was told that food safety officers from Brighton and Hove City Council visited the Azure restaurant on August 26 last year, following a complaint.

Len Batten, prosecuting on behalf of the city council, said the officers were concerned about the risk to health after finding mouse droppings behind a freezer and on shelving where dried food was stored, and food packets which had been gnawed by mice.

The manager of the premises agreed to voluntarily close the restaurant and it was allowed to reopen following cleaning and disinfection. 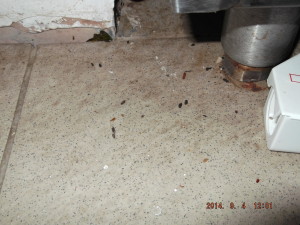 However, when members of the food safety team returned on September 4 to check the premises they found the infestation had returned, and was worse than before, with mouse droppings at 14 different locations, the court was told.

These included on five shelves used to store dried food and inside a packet of ground almonds; on the kitchen floor behind the freezer and under the sink; in a store room on the floor and on shelving where uncovered limes were stored; on the floor of a customer seating booth; and on a glass washer and shelving in the bar.

The food safety officers were again concerned about a risk to health and the premises once again closed until action was taken to clean the restaurant and tackle the infestation.

Director Mr Max Mazurenko appeared on behalf of XTO Ltd, which is based at Metropole Court, Kings Road, Brighton. The company was fined £450 for each of four offences on August 26 and £900 for each of six offences on September 9, plus £1,937 costs.

Tim Nichols, the council’s Head of Regulatory Services, said: “Fortunately cases such as these are rare, and most food businesses in the city and the council work hard to provide high standards of food hygiene.

“However this case sends out a clear message that the council will not hesitate to take action where necessary.”

Azure restaurant was closed during the winter, food safety officers inspected the restaurant last week and were satisfied there was no mice activity.