Brighton hotel garage to be converted into 18 flats

A large garage behind Brighton’s oldest hotel will be converted to housing after councillors unanimously approved the plans this afternoon. 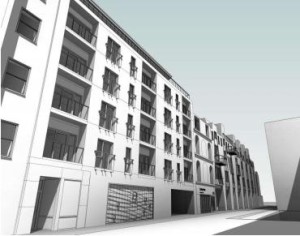 An artist’s impression of the new scheme

The hotel’s owners now have consent, subject to conditions, to demolish the three-storey garage fronting onto Black Lion Street.

It would be replaced with a new six-storey building with eight one-bed flats and 10 two-bed flats. Forty per cent of the flats would be affordable housing, with tenure arrangements still to be decided. There would be cycle parking and spaces for 14 cars.

In approving the scheme, councillors on the planning committee agreed with an officer’s report concluding the development would make efficient and effective use of the site.

Under conditions to be agreed with the council, developers would be required to contribute £45,000 towards opens spaces and indoor sports, £12,000 for real-time bus information boards, £20,000 for education and £14,000 for public art.

They would also be required to make a £9,000 contribution to local job creation and employ 20 per cent local labour during building.

Parts of the Old Ship date back to 1767 and are Grade II* listed.