A Brighton church is celebrating 25 years of providing fried breakfasts to the community.

Regular breakfasters at St Michael and All Angels Church were joined by the Bishop of Chichester, the Right Reverend Dr Martin Warner, on Saturday (16 May) to celebrate a quarter of a century of community breakfasts. 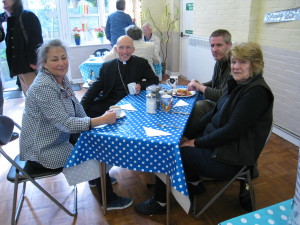 St Michaels in Victoria Road, Brighton, has been serving cooked breakfasts to local residents on Saturday mornings since 1990.

In his speech Dr Warner noted that Jesus had enjoyed eating breakfast with his friends.

“I hope that for everyone round here breakfast can have that quality,” he said.

“It’s a new day, a new start and God wants you to make the most of it.” 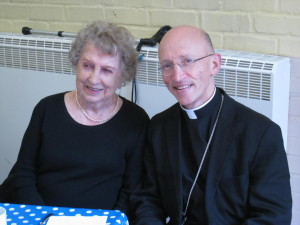 Also attending the breakfast was 96-year-old Enid Gray. Mrs Gray cooked the breakfasts for around 20 years, only giving up four years ago at the age of 92.

This time she enjoyed being cooked for, while her daughter, Jane Gray, who has also been serving the breakfasts for around 20 years, was at work in the kitchen.

The community breakfasts at St Michaels were originally meant to run for four weeks during the 1990 Brighton Festival, but they were so successful that they have continued ever since.

The breakfasts are cooked by volunteers and offered at low cost. 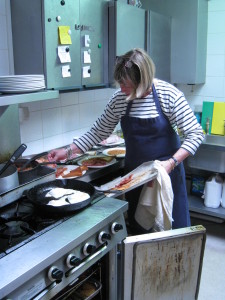 As homelessness has become a bigger problem in Brighton, the church has also used the breakfast to serve the homeless community.

The church gives homeless agencies vouchers for homeless people to get a free meal.

“People always think there’s a catch, he said, “but there isn’t.” 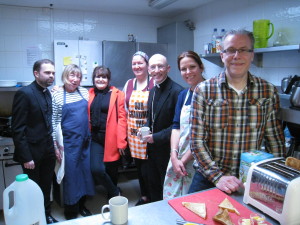 “It’s all done with a lot of love,” said local resident, Penny King.

“It’s a way of getting to know your neighbours, it breaks down barriers,” she said.

The community breakfasts are on a Saturday morning from 9am to 10.30am, with prices starting at £2.

As of this week St Michael and All Angels is expanding its community food offer to weekdays as well.

From Tuesday (19 May) it will be opening a community café on Tuesday and Thursday mornings from 9am to 1pm serving cakes and snacks.

The church is also keen to hear from charities or community groups who would like to use the hall during the afternoons for activities such as dementia support groups.

Any group interested in using the church hall during the day can email parishoffice@stmichaelsbrighton.org.