The amount of fly-tipping in Brighton and Hove has almost doubled following the rollout of communal recycling bins last year. 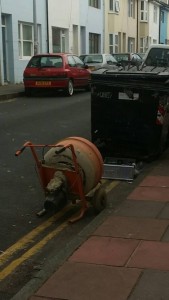 Figures obtained by Brighton and Hove News show that in 2014, when most of the bins were introduced, 3,506 fly-tipping reports were made to the council, 86% more than the previous year. In the first three months of this year, there have already been 1,047 incidents.

No earlier figures are available to compare the rates before and after communal waste bins were introduced, 150 in 2004 and 550 in 2009.

One resident who has a set of communal waste and recycling bins sited just outside his house, took this series of pictures over the course of a week showing all kind of large items, including tables, chairs, suitcases, a computer and even an old cement mixer, dumped by the bins.

He said: “As someone who lives right next to the communal bins, the problem is that there is continuous dumping noise and the bin areas are a communal dumping ground. 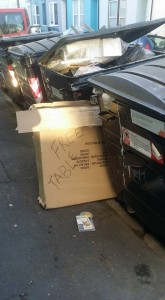 “Many, many people throw recyclable items in the waste bins, and leave loose trash around.

“There’s no longer accountability for dumping stuff outside your house – just take it to the bins, outside my house.

“Almost every day there’s something quite nasty at the communal bins.”

Councillor Gill Mitchell, the new Labour administration’s environment chief, said the problem was caused by two different factors – bins not being emptied efficiently and people using them as a dumping ground for larger items.

She said: “We first introduced communal waste bins in the city centre in 2004, but we also made sure that any fly-tipping was quickly cleared up. You can’t always foretell when this is likely to be a problem.

Part of the problem going on from then is the wider rollout of communal bins for recycling and the fact they’re not emptied regularly.

“People have come along with bags of glasses and have dumped them down by the bins because they’re full and they have no alternative.

“Getting those basics right, getting them emptied in an effective way is a priority for us and we are meeting with officers at the moment to discuss how to get those bins emptied.

“In our manifesto we said that we wanted to get the CityClean service working better and improve recycling levels and regain trust from residents who want to recycle. 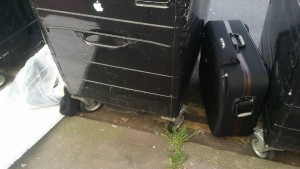 “People think oh, look, there’s a bin, at some point someone will be coming along to empty it, if I leave my old computer or hoover there, it will get taken. And once one person starts putting stuff like that next to a bin, it snowballs.

“This is a very difficult thing to tackle but it’s something that we are looking to do. We have got to read up on our methods of giving people information, and where they can take their rubbish,.

“We need to crack down on this irresponsible behaviour. We do have sanctions at our disposal if we can find the people responsible.” 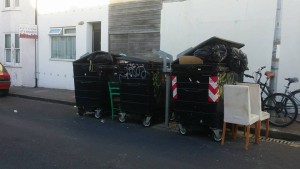 Green councillor Louisa Greenbaum, who sits on the environment committee, said: “There is, of course, no excuse for fly-tipping, it’s illegal, unsightly and antisocial.

“Unfortunately fly-tipping has increased ever since the introduction of communal bins, first introduced by Labour in 2004.

“Sadly the national picture on fly-tipping is grim: figures from The Department for Communities state fly-tipping increased by 20% in the last year alone. The cost of clearing fly-tipping to councils in England in 2013/14 was £45.2 million.

“The Greens have consistently argued for recycling bins to be made available and this has to be accompanied by stronger work on enforcement to crack down on fly-tipping and littering.

“We have been committed to a package of improvements as part of the service redesign for Cityclean including clearer signs on communal bins about fly-tipping and highlighting ways to correctly dispose of large items.

“We hope that the new Labour administration will continue with these plans and introduce the improvements we were working on.

“Bulky items can be collected by the council contractor, taken to recycling centres or better still, many items can be handed on to others through charity shops or on-line forums like Freegle. If you spot a fly-tipper, I’d recommend they be reported, responsibly and safely to Cityclean who may be able to prosecute.”