Do you recognise this woman? 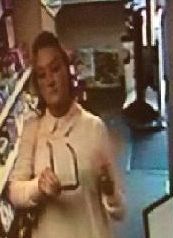 She tried to buy £2500 in Euros from a post office in Station Road, Portslade, using a fake bank card and a fake driving licence at about 2.20pm on 22 May.

Staff at the branch recognised that neither the bank card for the driving licence appeared genuine and refused to hand over any currency.

The woman then left the post office empty handed and went towards the seafront.

PC Adam Parris said: “If you recognise the woman or have any idea where she could be, please get in touch with us.

“We would also be interested in any other businesses that have been visited by the woman where staff have had similar experiences that they have not reported to police.”

The woman was white, in her early twenties, 5ft 4in and of average build. She had long brown hair and tanned skin and was wearing a pink top and dark trousers.

Anyone with information should email 101@sussex.pnn.police.uk quoting serial 952 of 22/05, call 101 or contact the independent charity Crimestoppers anonymously on 0800 555111.