A group of table tennis players with learning disabilities from Brighton and Hove visited Sweden for the first of a series of sporting exchanges.

The Brighton group included six players under 14 and seven adults from the Grace Eyre Sports 4 All BTTC sessions. 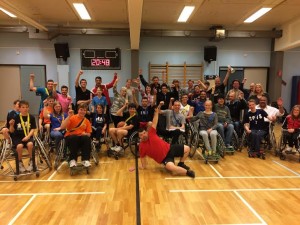 Table tennis players and coaches from Brighton, Berlin and Malmo

They played ping-pong for six hours each day and came together for a barbecue and five hours of wheelchair basketball on the final day.

“I learned a lot about myself. It was my first proper time away from my carer and I was out of my comfort zone big time. I really needed that and I feel more mature as a result.”

The third partner in the initiative is Berlin’s Wheelchair Sports Club.

Brighton welcomes visitors from Sweden and Germany in August. The clubs will meet in Berlin in October. And the exchanges will be repeated in 2016.

BTTC trustee Tim Holtam said: “The experience of playing table tennis with players from other countries and with Swedish and Team GB Paralympians was inspiring and many friendships were forged across ages and nationalities.

“It is a wonderful opportunity for the Brighton players to experience different aspects of Europe and we have learned a lot from the Swedish club.

“We can’t wait to welcome our Swedish and German friends to Brighton in August.”

Dedicated sessions are held for adults with learning disabilities and children in care.

The club provides 40 popular outdoor tables around Brighton and Hove. An estimated 42,000 games were played on the tables in six weeks last summer.