He was turning from Goldstone Villas into Station Approach by the florist, the footbridge and the entrance to the Hove Station Car Wash when he left the road and hit the station frontage at the foot of the steps. 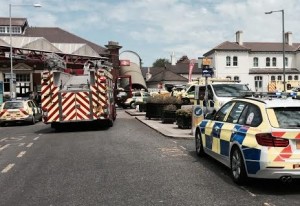 He is believed to have had a heart attack at the wheel.

They treated the driver outside Hove Station before taking him to the Royal Sussex County Hospital in Brighton.

Sussex Police closed Goldstone Villas between the corner of Clarendon Road and halfway along Station Approach.

The force sent a forensic accident investigator to examine the scene.

“Officers found a car had collided with the station building.

“A man who was driving the car, and who is believed to be the sole occupant, was taken to the Royal Sussex County Hospital and no assessment of his condition has yet been received.

“We understand that the station remains open at this time but the road immediately outside has been closed to traffic for the time being.”