A man from Moulsecoomb has returned to Sussex from a spell in a women’s prison ready to serve as a minister in the Church of England.

Adam Ransom, who has been going to St Andrew’s Church, in Moulsecoomb, is due to be ordained as a deacon today (Saturday 27 June) in a service at Chichester Cathedral.

He is one of 16 men and women taking on the role which involves helping a priest in a parish, usually for a year, before becoming ordained as priests themselves.

Mr Ransom, who will serve as the curate at St Philip’s, in Eastbourne, recently completed a training placement in a women’s prison as part of his preparation for the ministry.

He spoke about it in an interview which can be seen on YouTube.

Mr Ransom is keen for churches and ministers to make better use of social media, including Facebook and Twitter, to reach out to people, especially the young.

He found his faith through a far more traditional medium – the printed word. He said: “Although I was baptised as a baby I didn’t have any real engagement with the Christian faith until a few weeks before my 18th birthday when a chance reading of a Gideon’s New Testament changed my life in an instant.

“All of a sudden God was all too real to me and it was from this encounter that a sense of vocation to ordained ministry began to grow.

“It took another seven years before I eventually approached Father John Wall, at St Andrew’s, Moulsecoomb, and asked to explore my calling.

“During those seven years I completed a BA degree in theology through Chichester University and lived for a while in Cornwall, working as a crematorium technician.

“Having spent two years training at the College of the Resurrection, Mirfield, I am looking forward to returning to Sussex, to ordination and to being able to begin to live out my vocation in the parish.” 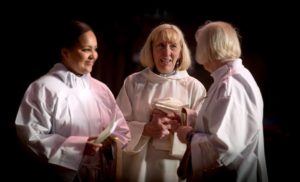 Kate Lawson during her ordination as a priest with Tanya Hockley and Beverley Miles at All Saints Church in Hove. Picture by Jim Holden

One of those being ordained today, Ben Sear, who will serve in Patcham, said: “I grew up in a Christian home in Sussex but the turning point in my life came at the age of 16.

“My life began to change and God was so generous in answering my questions and prayers.

“As time has gone on I have become more and more convinced that the Christian reality is true and makes most sense of the world.

“I feel that God is calling me to the particular role of leading, feeding and praying with God’s people in full-time ministry.

“My wife (Claudia) and I got married last summer and share a mutual love for the cinema, Monopoly Deal and steak.

“We are very much looking forward to moving to and getting to know people in the parish.”

Hugh Bourne, a married father of two who will serve at All Saints, Lindfield, said: “I first came to Chichester diocese in 2005 to study internet computing at Sussex University. 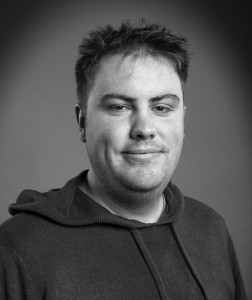 “After a number of years worshipping and serving at Bishop Hannington Church, Hove, I pursued a call to full-time parish ministry.

“We’ve spent the last three years, together learning and growing at Oak Hill College, feeling both well equipped yet unprepared for the challenges ahead.

“We look forward to serving and hoping to share not only the gospel of God but our lives as well.”

Their ordination, by the Bishop of Chichester Martin Warner, follows a series of services earlier this month when 14 deacons were ordained as priests.

One of the services took place at All Saints Church, in Hove, where Kate Lawson has been based.

She was one of three women to be ordained as a priest by the Bishop of Lewes Richard Jackson and she will now serve as a curate in the parish.

Dr Warner said: “We are praying for each of them and I know that each of the communities in which they will serve will warmly welcome them and their families at the start of their public ministries.”