Can you help catch crooks who strung life-threatening illegal net across harbour entrance?

Fisheries enforcement officers have their eyes on a catch … the crooks who strung an illegal net across the entrance to Shoreham Harbour.

They could have disabled a vessel and potentially cost crew members their lives, according to the harbour master.

Shoreham Port said: “On Saturday 20 June Shoreham Port, local fishermen, lifeboat crew and the Sussex Inshore Fisheries and Conservation Authority (IFCA) were all involved in the reporting and safe removal of an illegal fishing net strung across the River Adur estuary.

“The net was spotted by a local fisherman early in the morning. 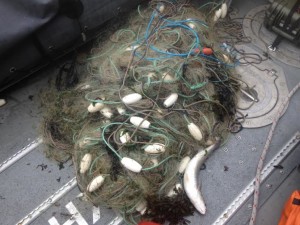 “The skipper of the IFCA patrol boat located the net that had been fastened to the north river wall piling opposite Soldiers Point and strung across the river.

“The illegally placed net had caught a number of flat fish and mullet and was causing a dangerous obstacle to safe navigation.

“Live fish in the net were returned to the estuary and the obstruction was removed.

“The IFCA has a fixed engine byelaw which prohibits such netting.

“If you saw anything suspicious related to this incident that you wish to report, or you recognise the net pictured, then please contact the Sussex IFCA.”

Sean Ashworth, from the Sussex IFCA, said: “We fully support legal sustainable fishing but this is an example of irresponsible and dangerous practice.”

“An incident like this is rare but if left unreported could have had very serious consequences for our stakeholders transiting the river.

“The net could have caused a vessel to become entangled, disabling the vessel in the strong tidal waters of the River Adur and endangering the lives of the occupants.”

The Sussex IFCA is responsible for managing marine fisheries and conservation in an area of more than 500 square miles of Sussex coastal waters.

Anyone with information about the incident is asked to phone the Sussex IFCA on 01273 454407.