When Katie Bates was awarded the top prize at an awards ceremony this evening, she was greeted with silence.

The 25-year-old Brighton woman was named the City Achiever of the Year at the annual City College Brighton and Hove awards night.

As she stepped up to collect her prize, the hall full of staff, fellow students, parents and supporters waved their hands to sign applause in a highly visible way. 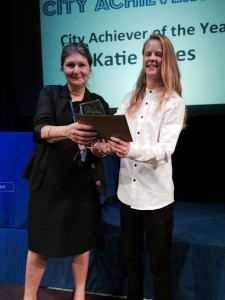 Miss Bates, a former pupil at Hamilton Lodge Deaf School, in Brighton, had already picked up the award for Learning Support City Achiever and had been greeted by silent applause.

Staff spoke of how she refused to allow her deafness to be a barrier, had integrated confidently and would help anyone.

They said: “Katie’s progression at the college has been remarkable, having started on a foundation learning course and progressed through the levels to Level 3 in painting and decorating.

“She is profoundly deaf but this has not hindered her from consistently producing excellent work in theory and practicals.

“She has also adjusted from being in a totally British Sign Language environment at Hamilton Lodge School to successfully and confidently integrating into a hearing environment at the college.”

City College’s senior communication support worker Bella Austen said: “I feel that Katie is a worthy winner of this award because she’s a very strong young woman who has overcome tough obstacles while always putting herself out to help her peers.

“It is her constant striving and dedication to increase her skill level that is one of the many impressive things about her.

“She has a ‘can do’ attitude, is a joy to work with and a role model to all teens who are facing challenges.”

She was one of 40 students to collect City Achiever awards from more than 7,000 students at the college.

The event this evening (Wednesday 1 July) was hosted by Guy Lloyd, from the Brighton radio station Juice 107.2FM.

He said: “When you come up to get your award, really milk it. I went to college and won nothing!”

Interim principal Monica Box told students: “I’m 65. I’ve been working in education since I started teaching at a comprehensive school in 1972.

“I’m a dying breed. In future very few people will spend their whole working life in one career.” 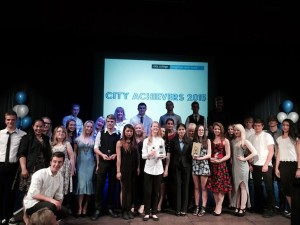 She urged students to be flexible and added: “Always be open to new chances and opportunities.”

“Our students,” she added, “are going to set the economy alight.”

The prizewinning students picked up awards for art and design, business, hairdressing, music digital arts, carpentry, sport and many other topics.

The college said: “There were also external awards, with an Outstanding Employer Contribution Award going to Chris Kraszewski, the owner of Carats Café, in Southwick, a business that has gone beyond the call of duty when it comes to working with the college to support apprenticeships and job opportunities for young local people.

“Chris deeply appreciates the mentoring and support he received when he was younger so wanted to do the same in return.

“In the past year he has taken on seven apprentices at the café and is committed to ensuring that they continually learn and develop their skills in the workplace.”

The Golden Alumni Award went Amy Taylor, who trained in holistic therapies at City College in 2001.

She runs Purple Turtle Therapy, helps train current students, and thanked the college, saying: “You supply me with great staff.”

Jeremy Jacobs, the college’s entrepreneur in residence, shared the story of his journey from working in a call centre to running a family bakery.

The 34-year-old Brightonian went to university as a mature student hoping to become a web designer. He ended up working in digital marketing.

He ended up back in Brighton and offered to build a website for his Mum. She liked baking cup cakes, he said, and when he built her website, the airline Virgin Atlantic called one day.

“We now have our own bakery in Worthing and we’re supplying British Airways. And we’ve just opened a shop in Hove – our first shop.