A Hove hairdresser celebrated 40 years of service in the same street with a party for customers today (Saturday 18 July).

Keith Stevens, 62, has been cutting and styling hair at Hair Scene in Boundary Road, Hove, since 1975. 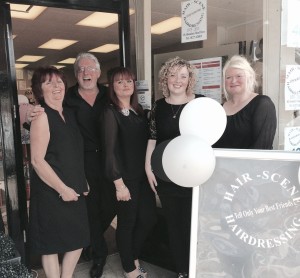 His first salon was at the southern end of the street. Fifteen years ago he moved to premises opposite Tesco.

Mr Stevens, who lives in Southwick, celebrated with family, friends, staff and a steady stream of customers.

As well as cakes and drink, the celebrations included a raffle in aid of the British Heart Foundation.

Mr Stevens said that the charity had been chosen because his wife Sue had had two heart attacks.

He said that he had no plans to retire, adding: “I love it. I drink tea, talk to lovely friends and cut hair.”