Brighton and Hove Albion goalkeeper Christian Walton is to spend the season out on loan to League One club Bury.

The England under-20 keeper linked up with his new team-mates today (Tuesday 21 July) after Bury returned from their pre-season tour. 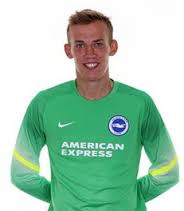 Albion manager Chris Hughton said: “We want Christian to play regular first-team football as soon as possible and Bury will give him that opportunity.

“Bury are a club who have a similar playing philosophy to us and in David Flitcroft I feel they have an excellent manager who will be good for Christian.

“They have just moved into Manchester City’s old training facility in Carrington and, having won promotion last season, Bury are a club with ambitions to continue their progress.

“They’re a good fit for Christian. He will get the opportunity to play regularly at a good level and I am confident this loan move will benefit all three parties – Christian, Bury and ourselves.”

Walton joined Albion from Plymouth Argyle. He was a regular on the bench last season and played four games for the first team, making his debut at Spurs in the League Cup.

He kept clean sheets against Wigan Athletic and Middlesbrough and represented England in the under-20s.