The teenager was at the American Express Community Stadium in Falmer on Tuesday night (21 July) to sign a two-year contract. He completed a medical at the training ground in Lancing earlier in the day. 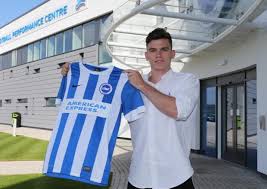 Albion manager Chris Hughton said: “Even at the age of 19 Jack is a well-known name and, having spent the past six years at Real Madrid, there is no doubting his pedigree.

“He has a lot of potential, is a skilful type, with a good eye for goal and can operate as a striker or playing just off of a striker.

“We hope we can give him the platform to realise his undoubted potential.

“He has had an excellent grounding, having come through the youth system at Real Madrid and also has international experience at youth level, having featured for Scotland’s under-17 and under-19 sides.”

Harper is currently recovering from a knee injury sustained last season and is at least eight weeks away from returning to action.

Hughton added: “Jack’s next step is to move up to senior football but his first priority is to complete his rehabilitation and work to get his match fitness then challenge to break through into our first-team squad.”

Harper was born in Malaga to Scottish parents and joined Real Madrid at 13, having been on the verge of signing for Sevilla.

He graduated through Madrid’s youth system and last season played for the club in the under-19 UEFA Youth League, facing the likes of Liverpool, Basel and Ludogorets. He scored three goals in six appearances.