Lorry gets stuck in The Lanes

A lorry trying to make its way through The Lanes has got stuck in Black Lion Street this lunchtime. 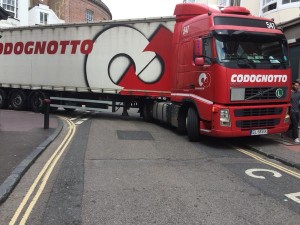 Joe Ifill-Hosier took this picture of the Polish HGV which has got itself jammed while trying to turn out of Black Lion Street into Prince Albert Street.

Rob Newman-Williams, assistant manager of Food for Friends, said: “It almost came through one of our windows and took out one of our hanging baskets – we’ve entered Brighton in Bloom so we’re not happy about it.

“He’s been here for about an hour, since we opened at midday. Nobody from the police has been down, but one homeless man was trying to direct him round the corner.

“It’s been a little bit entertaining – all our customers are up against the glass watching what’s going on.

“Now he’s reversing, but he’s got stuck back at the Black Lion.”

A spokeswoman for Sussex Police said the force had not been called out.