Heritage and conservation experts are to overhaul two statues on the seafront in Brighton and Hove.

They will carry out specialist maintenance and cleaning work to restore the Peace Statue on the Brighton and Hove border and the Queen Victoria statue at the bottom of Grand Avenue, Hove. 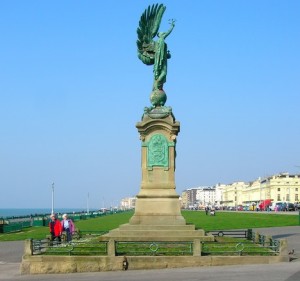 The work is being done on behalf of Brighton and Hove City Council.

It will involve painstakingly cleaning and carrying out any necessary repairs to the two bronze statues which take a battering from the elements because of their exposed seafront location.

The council said today (Monday 10 August): “The statues have not been cleaned for some time and, as well as removing years of grime and salt, work on the Peace Statue will include removing red paint daubed by vandals several years ago.

“The works will involve repairs to the supporting stonework plinths and the statues themselves will receive a protective wax coating.

“The work is being undertaken by PAYE Conservation. It is due to commence later this week and is expected to go on for around eight weeks.”

Scaffolding will go up to enable the work to be carried out.

The council added: “The Peace Statue was built as a memorial to Edward Vll and depicts a 30ft angel holding an orb in her left hand and an olive branch in the right. The statue was unveiled by the Duke of Norfolk in 1912.

“The statue of Queen Victoria was commissioned in 1897 to commemorate the 60th anniversary of her accession to the throne and was not unveiled until 1901, the year she died.”