Graffiti at Brighton’s i360 in memory of rapper Sean Price

Aroe MSK and other street artists spray-painted the barriers around the i360 building site near the West Pier in Brighton last weekend. 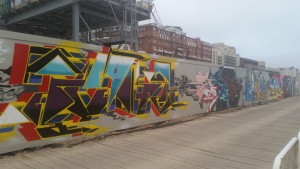 The vista at the i360 looking east towards Brighton

Aroe MSK said that his street art was in memory of the American rapper, Sean Price, who died aged 43 in Brooklyn, New York, on Saturday (8 August).

Sean “Ruck” Price was a member of the hip-hop groups Heltah Skeltah, Boot Camp Clik and Random Axe. Price, who died in his sleep at home, had a wife and three children. The cause of his death is not yet known. 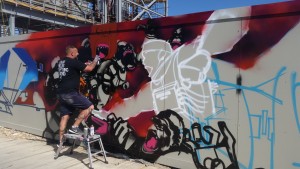 Aroe MSK may be making a statement about large corporations

Rapsody added: “This is the worst. To the legend … and big man with a big heart and big sense of humor … we love you Sean Price. RIP.”

“Sean Price went from being a childhood hero of mine to a great friend. He was the most competitive MC I’ve ever met & kept me on my game,” Talib Kweli tweeted. 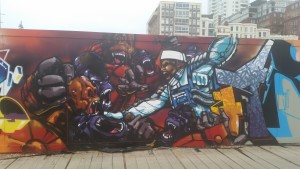 Price was working on a new mixtape Songs in the Key of Price, due out Friday 21 August, at the time of his death.

A Brighton scene would be incomplete without a seagull. 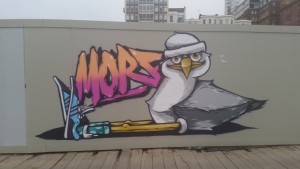