The growing sixth form at Hove Park School has recorded a 5 per cent increase in A to C grades in A levels since last year. 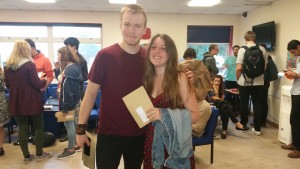 Sixth form head Tania Banks said: “Congratulations to all our students on a fantastic set of A-level results.

“I am really proud of each and every student at HP6 for their hard work, resilience and outstanding work ethic.”

The school said today (Thursday 13 August): “At Hove Park we are really pleased with the increase of our A-level pass rate to 98 per cent with more students achieving the top grades of A* than ever before.

“We are really proud of the increase of students being awarded the top marks with over 32 per cent achieving grades A* to B and over 60 per cent of all A levels being awarded a grade A*to C which is a 5 per cent increase on last year’s results.

“This increase in attainment alongside the doubling of sixth form numbers at HP6 highlights the fantastic progress we are continuing to make as a school.” 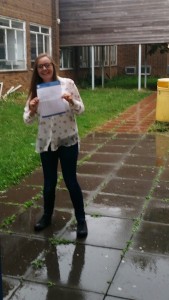 Among the students heading off to university is Farrell Keeling although he has chosen to stay in Brighton and Hove, taking up a place at Sussex University next month. He said: “The city has a really good vibe and I like the area. University is also very expensive.”

George Hadrys has been accepted by Bristol University. He got two A*s in maths and further maths and a C in physics. He said: “I feel more confident now. All Hove Park staff are amazing. Mr Edmond taught me all three subjects over the two years and general studies.”

Erin Bond exceeded her expectations by getting three A* grades and an A. She is off to Nottingham University to become a vet. Her offer from Nottingham was AAB and she is delighted.