Brighton and Hove Albion have signed winger Jamie Murphy from Sheffield United for an undisclosed fee.

The club said: “The 25-year-old Glaswegian has agreed a four-year deal with Albion and passed his medical earlier today at the American Express Elite Football Performance Centre.”

Albion manager Chris Hughton said: “We are really pleased to welcome Jamie to the club. He is somebody we monitored very closely last season and he was one of Sheffield United’s most influential and creative players. 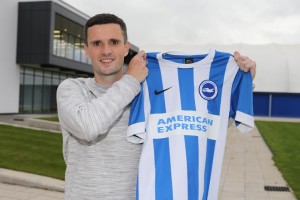 “He’s a winger who can play on either flank and he will give us extra options in both wide positions.

“He’s a very good age, an age where he can continue to develop as a player and build on his experience.”

Murphy began his career as a youth team player with Clyde. He switched to Motherwell in 2002 and broke through to the first team in 2006, helping the club reach a Scottish Cup Final and regularly qualify for European football over the next seven seasons.

After a successful spell at Fir Park, Murphy headed south and joined Sheffield United in January 2013 and has twice helped the Blades reach the League One play-offs.

To date the winger has more than 60 career goals to his name and over 200 appearances. He has also represented Scotland at under-21 level.

Murphy will be eligible for the match against Huddersfield Town on Tuesday (18 August).