1) The fact that Lewis Dunk was only a substitute doesn’t necessarily mean he will be transferred to another club next week although we’d be surprised to see him line up against Huddersfield on Tuesday night (18 August). 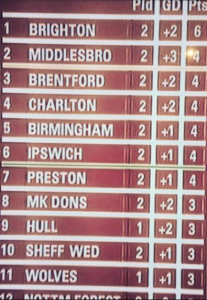 3) That the Seagulls lead the Championship for the first time since 2012 and are currently the top-rated club outside the Premier League.

4) It is possible that Bobby Zamora might play a part as an over-age player in the under-21s match against Swansea tomorrow evening (Monday 17 August) at the Amex.

5) That ex-Albion legend and Brightonian Adam Virgo is looking very accomplished as a co-presenter on Channel 5’s Football League programme. But maybe lose the tie Adam!