Abandoned Brighton Station bikes to be sold for Martlets Hospice

Bikes abandoned at Brighton Station are now being restored by prisoners and donated to Martlets Hospice, which is selling them at their charity shops. 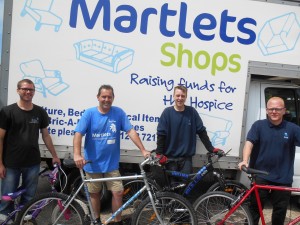 Recycle Your Cycle (RYC) has teamed up with the station and hospice to reclaim any bikes left in racks for more than three months.

RYC employs prison inmates to recondition the bikes, which are then sold in the Martlets furniture warehouse off the Old Shoreham Road in Hove and charity shops to raise much needed income for their patient care.

Eve Collins, Head of Retail at Martlets Hospice said: “This is a fantastic fundraising scheme for the hospice. We simply collect the bicycles from Brighton Station, drop them off at RYC and local prison inmates do an excellent job of repairing and servicing them and getting them back to their former glory.

“The bicycles sell like hot cakes in our warehouse and shops and the last lot of bikes we picked up raised almost £700 for our patient care.”

The initiative has been a winner all round as not only does it raise vital funds for Martlets Hospice and solves the problem of bike storage at Brighton Station, it also gives the local prison population the opportunity to learn skills and is fantastic for the environment as the bikes are repaired and recycled rather than ending up in the scrap metal yard.

Beth Holbrook Manager of Brighton Station said: “We are delighted to be involved in this project which has solved our storage problem and is raising money for the Martlets, one of our chosen charities. I understand the bikes sell quickly and customers are delighted to get reasonably priced bicycles.

“The charity partnership with Martlets has been excellent and we have raised almost £20,000 for them in the last two years. We know how important their vital care is in the local Brighton & Hove community and are proud to be able to continue to help them raise the money they need via this project.”

Mark Abrahams CEO of Recycle Your Cycle states: “With this scheme, prison inmates are offered the ability to gain a valuable skill to help with their rehabilitation and future employment prospects, moreover it also enables local people to gain the social and health benefits of cycling by offering them refurbished bicycles at a competitive price.”

Scores of motorcyclists in charity ride to Brighton