The Batsuit worn by Christian Bale in The Dark Knight rises will be on display at Brighton Museum’s fashion and style gallery for a month from today. 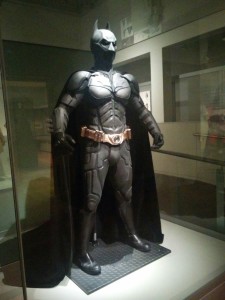 Superhero fans will also get the chance to meet the team behind the costume at a workshop in Old Steine Gardens on September 19.

The team behind the costume, including batsuit wrangler Day Murch, will be on hand at the workshop to explain how the suit was made and used.

The museum exhibition, which runs until September 20, is free to Brighton and Hove Residents on presentation of proof of address. Non-residents must pay £5 to enter the museum.

The workshop and exhibition are part of a five day festival, The Costume Games, in which participants are encouraged to dress up for talks, art events and an awards ceremony.

In Christopher Nolan’s The Dark Knight and The Dark Knight Rises films, the Batsuit functions as Batman’s armour, with a separate helmet and a cape which ejects from the shoulder blades to form a hang-glider.

The suit is also equipped with a utility belt climbing harness, which is also used to carry the Batarang and grapple gun.

It was created by David Finch, who incorporated characteristics of the suits in earlier films by Christopher Nolan and previous director Tim Burton.

Bus driver retrieves cash after being robbed in Hove