A stunning beachfront house on Hove’s millionaire’s row which boasts Norman Cook, Zoe Ball, David Walliams and Adele as neighbours has had its price reduced by 18 per cent. 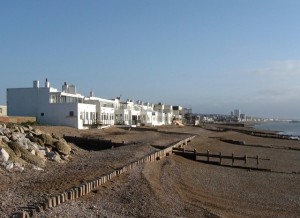 Number 4 Western Esplanade went on the market with Brand Vaughn in April priced at a cool £4 million. Its owner, retired Harley Street doctor called Malcolm Vandenburg, was interviewed about his celebrity neighbours for a piece in the Mail, which described it as the seaside Stella Street.

He told how Adele’s dog comes round to visit in the summer when the doors are open and that he failed to sell his vinyl to Norman Cook, aka DJ Fatboy Slim.

Nick Berry also lives along the exclusive row of houses, which has also been home to Sir Paul McCartney and Heather Mills and visited by Frank Sinatra and Ava Gardner in the past.

But its starry allure didn’t work the required magic and it is now being advertised via Savills for the reduced rate of £3.25 million.