New Brighton bar to drop drinkers off on a dead donkey

A new Brighton bar is celebrating its opening with a donkey taxidermy taxi service, which can be hailed via Twitter. 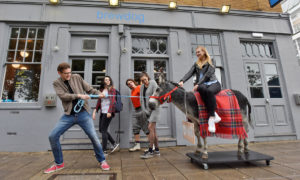 Visitors to the new Brighton BrewDog bar, which will open to the public on Friday 28 August, can flag down the novel means of transport with a tweet using #TaxidermyTaxi at @BrewDogBrighton.

The humorous take on the tourist staple from the Scottish brewery is the latest in a series of stuffed stunts, which has seen fat cats thrown from helicopters over the city of London, beer poured out of a stuffed deer’s head and bottles of the world’s strongest beer secreted inside squirrel corpses.

The attention-grabbing taxi service will carry drinkers directly to the door of the new bar situated on the Grand Parade, so they can be introduced to the latest hop haven established by the brewery intent on world domination.

BrewDog co-founder James Watt said: “We’ve long been looking to open a beer mecca in Brighton, it’s a city with a cool, independent vibe and a growing craft beer scene, and we want to offer craft beer fans in the city something they haven’t seen before.

“What better way to get locals in the door than personally delivering them there with a donkey taxidermy taxi service?

“The taxi rides are great for people looking to take in the Brighton scenery from an interesting vantage point, and we’re delighted to be able to open our unique cab rides for the opening weekend of the bar.”

The newest venue, which has a capacity of 120 over one floor with 30 beers on tap, will be the 31st BrewDog pub. It will be launching at 52-54 Grand Parade in the old Blind Tiger Club venue, just north of the Royal Pavilion.

The bar’s draft taps will serve as a library of fermented masterpieces from all over the world, with 30 beers on tap and BrewDog beers including Punk IPA, Dead Pony Club, Jackhammer and Five AM Red Ale alongside small batch brews and an array of guest and international beers.