Big turnout in Brighton to save Preston Park Cycle Track 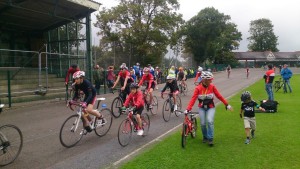 A bike ride from Brighton seafront in support of the campaign to save Preston Park Cycle Track had such a big response that organisers had to move the meeting point.

The campaigners also reached an initial fundraising target of £2,000 this week to help pay for the campaign for the track to be modernised.

They now aim to raise at least £5,000 as their efforts gather pace.

The track falls short of safety standards for competitions at a time when cycling is growing in popularity.

It is estimated that it will cost hundreds of thousands of pounds to bring it back up to a suitable standard.

The campaigners are looking at other ways to make a modernised velodrome more viable, perhaps making the space available for other sports such as cricket or tennis.

In the meantime the campaigners have gathered thousands of signatures on a petition which can be reached through the Save Preston Park Cycle Track Facebook page.

And a public meeting is to be held at 7.30pm on Monday 19 October at Knoyle Hall, in Knoyle Road, Brighton, just round the corner from the cycle track.