By Tim Hodges from The Amex

After the emotions of the tribute to the victims of the Shoreham airshow disaster, Albion got off to a flying start .

Tomer Hemed pouncing on a mistake by Hull keeper Allan McGregor fired Albion ahead after good  work from both Sam Baldock and Liam Rosenior .

McGregor spilled Dale Stephens  shot, Baldock turned the ball back into the box and Hemed was on hand to sweep the ball home for his 4th of the season.

Rosenior was making great progress down the right hand side for Albion and presented Hemed with another chance soon after, but the Israeli forward tried to take too much of a deft touch and the ball skimmed away to safety .

Albion were piling the pressure on Hull for long periods, without really threatening a second goal .

Hull had a good chance from a free-kick, but Chuba Akpom skied the ball into the north stand .

David Meyler Hull’s  midfielder, infamous for his spat with Alan Pardew, crudely hacked down Dale Stephens in full flow. Meyler was cautioned and them soon replaced by the equally well known and formerly hirsute Tom Huddlestone.

David Stockdale was looking commanding in the Seagulls goal and is still defending a total shut-out at the Amex so far this season.

The Albion keeper palmed Akpon’s effort into the side netting as half time  approached .

Before the break Hull stepped up thier game a little . However Stockdale and his defence were equal to this . The Seagulls keeper was taking a number of confident catches and where necessary punching the ball a good distance .

The second half was a game of cat and mouse . Although Albion were coming out on top in the midfield battle . Beram Kayal and Stephens providing more than a match for Huddestone and Abel Hernandez .

Hull looked to the channels but got little change. out of Gaetan Bong or Bruno.

Bong was particularly impressive on a number of occasions intelligently steering his opponent wide rather than diving in .

A mistake by Greer saw Stockdale at his alert  best to deny Abdel Elmohamady a half chance .

Then soon after the keeper kept out Hernandez and Huddlestone in quick succession .

Then on 74 minutes the sight Albion fans had awaited too long to see , as Bobby Zamora made his Amex and third home debut for the club. 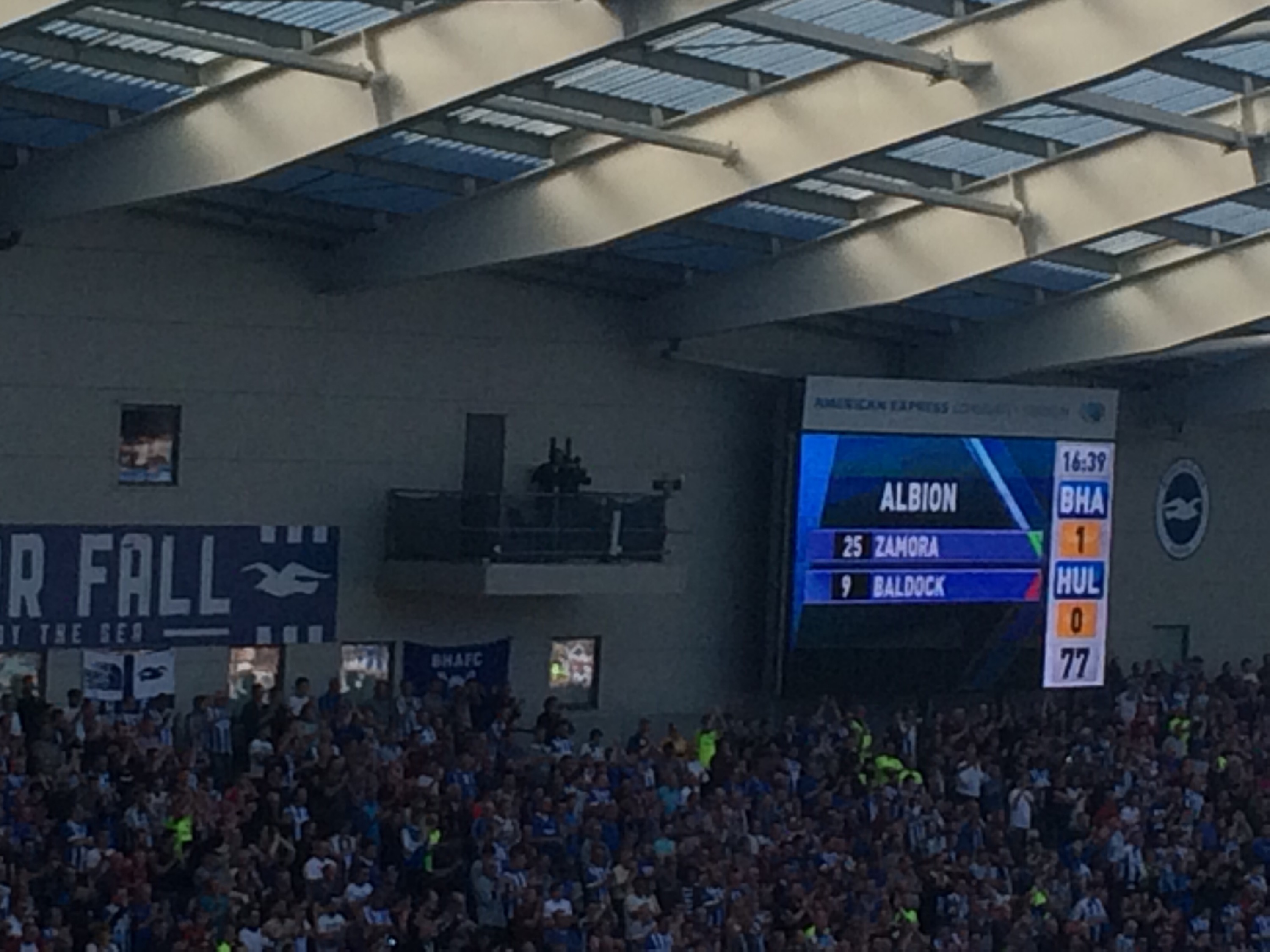 His first home appearance since scoring against Watford in April 2003 .

It was  Zamora’s penetrating run that  was part of the build up for Albion’s best chance of the second half . Bong crossing for Kayal who’s goal bound shot appeared to hit Micheal Dawson on the head and deflect to safety .

The site of Zamora head down, with the ball at his feet, striding towards the Hull defence was dream come true for most Albion fans .

Before the end, the impressive and hard working Rosenior had a chance to get a second for Albion but got in a tangle with McGregor. And Hull’s Brighton born, former Whitehawk and Burgess Hill striker Greg Luer replaced Akpon.

Albion held on for the win and unlike the big race at Doncaster this wasn’t a case of first and second places  being  reversed. As the Seagulls held on fairly comfortably to  stay top of the Championship.

The league leaders next take on Rotherham United on Tuesday evening (15th September ) at 7:45pm.