Police have today released images of three men they’d like to speak to about an incident in which a man was harassed on a Brighton train. 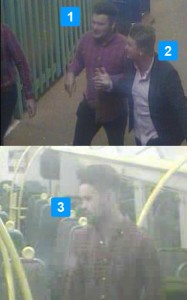 The incident happened between 10.15pm and 10.50pm on Saturday, 3 October on a train travelling between Southampton and Brighton.

Officers believe they may have boarded the service at Barnham. One of the men sat next to the victim and made sexually explicit remarks while another filmed the incident on his mobile phone.

The victim challenged this behaviour and was threatened by the group, who left the train at Worthing.

PC Edward James said: “The victim was left feeling humiliated and intimidated by the actions of these men. Nobody should have to put up with such threatening and inappropriate behaviour.

“I believe the men in the stills have information about the incident. Please tell us who they are.”

Brighton’s gay village in moves to become a parish council