An inquest into the death of Nick Cave’s son Arthur, who fell from a cliff in Ovingdean in the summer, has heard the teenager had taken LSD. 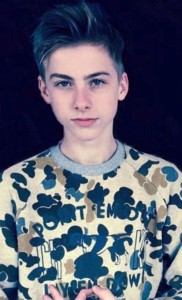 The hearing, at Brighton Coroner’s Court at Woodvale Crematorium, was told how Arthur was spotted staggering along the cliffs by concerned motorists stuck in slow moving traffic.

They saw him topple over, then get up again before disappearing over the edge. Some of the drivers got out of their cars to look for him.

The Telegraph reports witness Veronica Langford telling the inquest: “As we approached the top of the hill I noticed a young man walking – staggering and zig-zagging on the grass.

“I was concerned and my initial reaction was that he as under the influence of drugs or alcohol. He slumped down into the grass and I couldn’t see him anymore. I thought to myself, ‘I need to get to him.’

“I was concerned and my initial reaction was that he as under the influence of drugs or alcohol. He slumped down into the grass and I couldn’t see him anymore.

“My daughter saw him get up and when I looked in my rear view mirror he had come down the bank and over the fence. I had a real sinking feeling at this point.”

Musician Nick Cave leaves the inquest into the death of his 15yo son Arthur who died after falling from a cliff. pic.twitter.com/nBWonVf7fb

The court was also read a summary of a statement made by a friend of Arthur’s, who had been taking LSD with him by Detective Constable Vicky Loft.

The pair had taken three tablets between them, and although initially in good spirits, they soon started having vivid hallucinations.

She said: “(The boy) became paranoid and felt like people were staring at him in cars. He couldn’t tell what was real and what was not real.

“He thought he could see Arthur covered in vomit but wasn’t sure if it was real.”

The boy said he was not sure if he and Arthur walked off together but he recalled they went their “separate ways”.

Arthur Cave was found on the underpass of Ovingdean Gap with life-threatening injuries on July 14. He died later that evening at the Royal Sussex County Hospital.

This afternoon, the coroner recorded a verdict of accidental death. Veronica Hamilton-Deeley said: “In his own family’s words … ‘He was a bright, shiny, funny, complex boy and we loved him deeply’.

Today, as the post-mortem report which detailed his injuries was read out, Nick Cave and his wife Susie briefly left the room, and as the verdict was announced, they embraced each other.