If you spot someone dressed as a giant pill in Brighton tomorrow, you aren’t seeing things – it’s all part of a stunt to highlight how people with AIDS are unable to access the life-saving medicines they need. 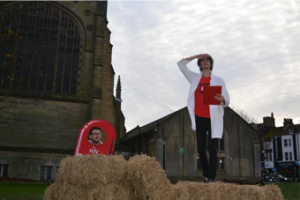 Sussex Youth Stop AIDS activists have taken inspiration from the Where’s Wally game and are inviting people to find activists dressed as pills hiding in and around the city centre to mark World AIDS Day.

Others dressed as doctors and pills will be at Churchill Square to raise awareness of the campaign.

Guy Wilson, Youth Stop AIDS campaigner said: “Our stunt is a fun way to show a serious problem. If you’ve ever played Where’s Wally, you’ll know how frustrating it is when you can’t find him.

“Imagine what it’s like not being able to access the life-saving medicines you need – that’s the situation facing millions of people around the world.”

Once they find the pills, people are being encouraged to take a photo and tweet it using the #MissingMedicines hashtag. A prize will be awarded to the best photo. The young activists are writing to their MPs to get their support and encouraging everyone to sign this online petition.

Around 36.9 million people globally are living with HIV/AIDS but only 15 million have access to proper treatment.

James Cole, President of Sussex Youth Stop AIDS, said: “The current system for developing new medicines limits competition and innovation which means vital HIV/AIDS drugs are either too expensive or simply ‘missing’ for most patients.”

“There is also a lot more that we want to do locally. Brighton has the highest prevalence of HIV/AIDS outside London and 1 in 4 people in the UK with HIV/AIDS don’t know that they have it.”

“There are lots charities in Brighton raising awareness and doing great work and if we can we want to support them too.”

Youth Stop AIDS want the UK government to join others at a meeting of the World Health Organisation (WHO) in March 2016 and agree to reforms for the research and development of essential drugs to combat the world’s deadliest neglected diseases.

The package of reforms promoted by the WHO would seek to introduce alternative incentives like cash prizes, reduce the use of 20 year patent monopolies and encourage the sharing of knowledge between researchers.

One suggestion is for a pooled fund financed by member countries to ensure the burden is shared equally with each contributing 0.01% of it’s GDP.

Tabitha Ha, Youth Stop AIDS Coordinator, said: “Never before has there been an opportunity like this to fix our global system. Just a small amount of investment and cooperation is all that’s needed to save the lives of millions of people worldwide.”

A special film screening and another stunt using fake bags of pills are also planned on Falmer campus to mark World AIDS day.

Man attacked on Brighton beach in early hours of the morning