Plans for a major redevelopment of the Aquarium Terraces to include a new branch of the Soho House members club have been recommended for approval. 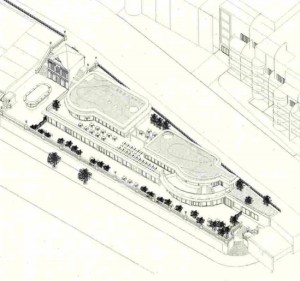 An artist’s impression of the Soho House plans

The proposals, which include replacing the lower tier glass pavilion with a new cafe, the removal of the circular building formerly occupied by The Terraces restaurant, and building two more pavilions, are set to be decided at next Wednesday’s planning committee.

Soho House would take the eastern three units, while new restaurants, including Dirty Burger and Pizza East, have been lined up to the ones next to Harvester nearest the pier.

The application differs from a previous one which was withdrawn in March in that it introduces a 10m gap between two new upper buildings rather than one continuous building, and these are now set into the site and not against the listed Marine Parade railings.

Planning officer Sue Dubberley’s report sets the impact of the development, particularly on the setting in Marine Parade, against the benefits of regenerating an underused part of the seafront and the creation of 205 jobs.

She concludes: “The proposed new structures on the site would have an impact on the current openness and this would affect the identified character of the conservation area at this point.

“Due to its relative scale it is not considered that the new building will have a harmful impact on the setting of the buildings on the north side of Marine Parade.”

“[National planning policy] requires that if the harm is less than substantial the public benefits of the scheme should be considered to outweigh the harm in order for a proposal to be acceptable.

“The heritage benefits to the public from the development of this underused and deteriorated structure are the repairs to the historic masonry balustrade, the  filling of the gap in the railings and improvements to the façade treatment of units two to five and the existing lower level of units six

The report notes that 35 letters of objection have been received, most of which are concerned that the new upper pavilions will spoil the sea view and break the principle that buildings north of Marine Parade should not rise above it.

The Kingscliffe Society, Brighton Society, Regency Society and the Conservation Advisory Group have also objected, echoing the concerns about the sea views from Marine Parade, and also raising the question of public access being blocked.

However, six people have written in support of the plans, saying it would help regenerate the “neglected” east side of the pier.

Historic England raised the issue of the impact on surrounding listed buildings as well as the Terraces themselves, saying: “We urge you to ensure that the proper consideration on the setting of the listed buildings is taken into account, in particular in relation to the impact of this taller development on the outlook of sea facing buildings on Marine Parade and on the open seafront character of this part of the conservation area.

“Any harm should be balanced against public benefits associated with the proposal including that associated with enlivenment of this area by bringing back into use units which have been empty for a number of years and repairs to listed structures.”

However, Ms Dubberly’s report reminds the committee that matters relating to property devaluation, loss of a view and the finances of the applicant are not material planning considerations.

She adds that existing buildings already “punctuate the sea view” at the western end of Marine Parade, the two proposed structures allow a view through and their curved design will extend that view.

In regard to public access, she said: “The Highway Authority has commented that the land is private land and not adopted highway, however in recent years the public have been allowed access.

“The closure of this route does reduce pedestrian permeability through the site however as there are still alternative routes retained which do not add inconvenience to pedestrian movements between Madeira Drive and Marine Parade and access is to be enhanced via a lift, therefore the Highway Authority do not consider this a reason for refusal.”

It also proposed that the developer be asked to contribute £50,000 for transport improvements, including three real time bus information signs for the New Steine stops and the westbound Sea Life Centre stop on Marine Parade.