Brighton and Hove Albion to sign Liam Ridgewell on loan

Brighton and Hove Albion have agreed to sign former Premier League defender Liam Ridgewell on loan from the new year.

Albion have agreed the deal with the Portland Timbers to sign their MLS (Major League Soccer) title-winning captain from Saturday (2 January).

Ridgewell will provide cover as the Seagulls struggle with injuries at the back.

The club said: “The 31-year-old former Aston Villa, Birmingham City and West Bromwich Albion defender can play in the centre of defence or at left-back.

“He will begin training with Albion immediately, with the club set to complete the transfer once the window reopens. 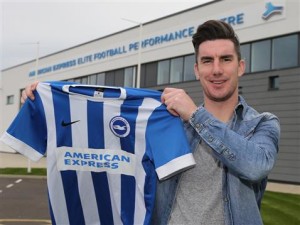 “Subject to international clearance, it’s likely Ridgewell will be eligible for his debut against Hull City in the FA Cup on (Saturday) 9 January, with the loan period running up to and including the Bolton Wanderers match on (Saturday) 13 February.”

Albion boss Chris Hughton said: “I know Liam very well from my time as manager at Birmingham City and he is an excellent and important addition for us.

“He will bring extra experience to our defence at a crucial time and will give me an option both in the centre of defence and at left-back.

“Liam has played the vast majority of his career in the Premier League, with more than 350 senior appearances. He’s also got experience of the Europa League and Championship from his time at Birmingham.”

Ridgewell was born in Bexleyheath in London. He started his career with West Ham United as a scholar before moving to Aston Villa in 2001.

He was part of the Villa youth team that won the FA Youth Cup in 2002 and played for England at under-19 and under-21 levels.

He made his Aston Villa debut in 2003 and went on to play 93 times for the club over six years with a brief spell on loan at AFC Bournemouth.

Really happy to have join Brighton looking forward to the games coming up. Thanks for all the good tweets ?? pic.twitter.com/MdhIk9UwGF

He was signed by Birmingham in 2007 and spent three of his four-and-a-half seasons with the Blues in the Premier League, making 175 senior appearances.

In January 2012 he signed for West Brom, where he played 78 times, before switching to the MLS with Portland Timbers in June last year.

At the end of his first season in the MLS, he spent just over a month on loan with Wigan in the Championship, playing six times.

This year, he captained the Timbers to a third-place finish in the Western Conference, and fifth overall, securing a place in the 12-team 2015 MLS Cup Playoffs.

Ridgewell’s side beat Sporting Kansas City, the Vancouver Whitecaps, FC Dallas and Columbus Crew in the final to be crowned US champions on Sunday 6 December.

He wrote in his Daily Mail column that it was “the best feeling of my career”.