Brighton & Hove News caught up with Albion goalkeeper David Stockdale earlier this week and he was in a buoyant mood. 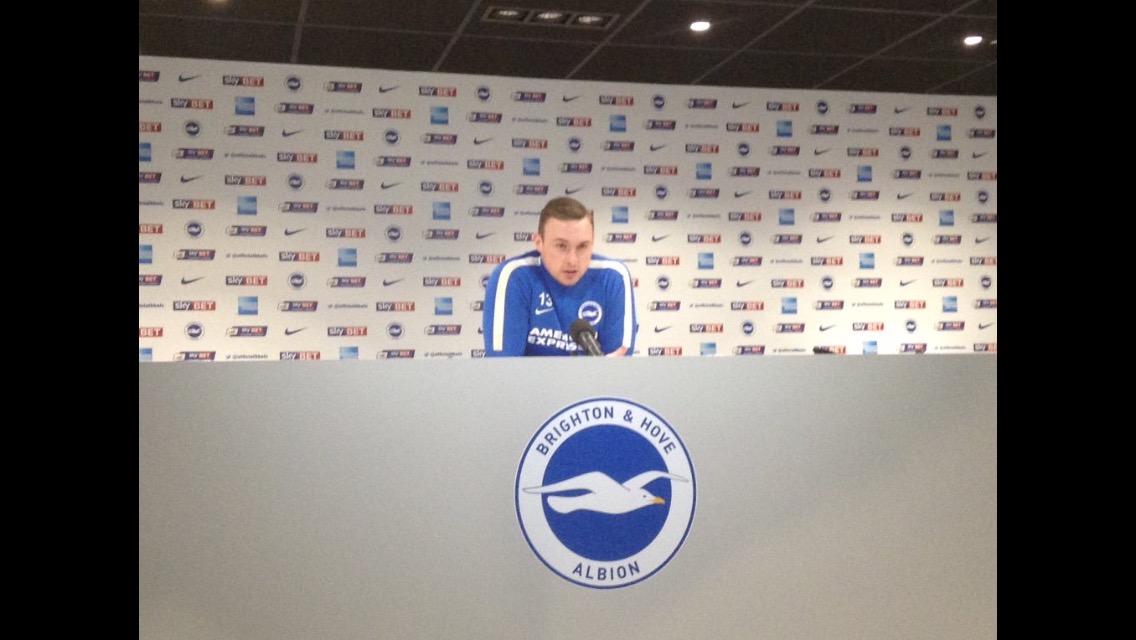 Leeds born  Stockdale has been ever present for the Seagulls so far in the Championship this season.

The thirty year old has been to numerous games at Elland Road and played for Leeds City boys in his youth, but by his own admission wasn’t good when he trialled  for United back in 1997 aged 12, quipping “I am probably not good enough now”

When asked which Leeds keepers inspired him he listed many including Jake Butland, Paul Robinson , telling me he could reel off as many as I required , but eventually went with Nigel Martyn as the Cornishman “played in that team” the Champions League campaign of 2001,culminating in the semi-final against Valencia. A match in which former Albion favourite Vicente also featured for Valencia.

Stockdale also recalled  to Brighton & Hove News what went through his mind as Liam Feeny broke towards him with the scores locked at 2-2 at the Amex earlier this month.  Stockdale said he wouldn’t reveal exactly what his thoughts were but joked “do you want the specific words that I used ? Because don’t think I can use them in this press conference” – “it’s difficult to explain because you’re in game mode ” – “is he going to take a extra touch” ? – is Bruno going to get back? – “will he try and go around me ? – do I go out and meet him ” – “Really about 100 things go through your mind. I just tried to make my self as big as possible,  he did take an extra touch so I knew I had to close the angle down , he is quick enough to go around me, I am like the  titanic turning , but I managed to save it, I made that decision and that’s what we focus on in training and I have to give a lot of credit to Ben Roberts and the influence he’s had on me this season.

In fact Stockdale described the goalkeepers union at the Albion as “brilliant” revealing he occasionally rooms with ex Leeds keeper and now Albion stalwart Casper Ankergren on away trips , but was keen to praise Albion number 2 although squad number 1 Nikki Maenpaa. “Nikki’s been excellent this season when he’s come in , second choice isn’t an easy place and I have experienced it before , but he’s been a true gentleman and when he’s come in he’s done brilliant, we always go over each other games and if I wasn’t doing  the thing I couldn’t complain about him going in” – and the games that his played in esspecially at Hull (FA Cup 3rd Round ) he’s man of the match I’d say” –  but Casper could easily play and then you’ve got Chrsitian (Walton) who’s been unlucky with a couple of loans, so if you put it that way you have one of the best upcoming goalkeepers and one of then oldest , I think we are very lucky this year with goalkeepers

Stockdale was very keen to point out his pride in being Leeds born and bred and that it won’t detract from his Albion duties on Monday night. Mentioning family members who not only don’t want his hospitality tickets,  but won’t speak to him if the team he plays for are victorious over Leeds.

He nearly signed for United in around 2011 but it didn’t quite happen.

In a way he reminds me of Paul Ifill. Who was born and raised in Saltdean played for a host of other clubs including Palace , always described the Albion was ‘us or we’ in interviews but never got a game for the Seagulls . The nearest Ifill got was two weeks training at pre season in July 2009. Before taking up an offer he couldn’t turn down with Adelaide.

However Stockdale seems determined to pull on that  goalkeepers shirt  of Leeds United one of these days . “It’s just a Leeds thing”