A man is in hospital after being stabbed in a Brighton seafront square in the early hours of this morning. 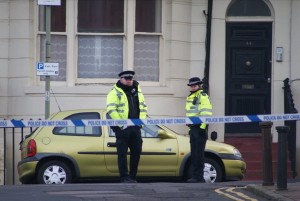 The victim was attacked outside the Regency Tavern in Regency Square at about 2am. The crime scene remains sealed off while police continue their inquiries.

Police are preparing a statement but confirmed that there had been an incident in which a man was stabbed and that the victim was currently receiving hospital treatment.

Terry Wing, who lives in the square, got back home from working a night shift at about 3am to find his home surrounded by emergency services.

He said: “Some poor person has been seriously stabbed outside my house. The whole area around my house is cordoned off with blue police tape and police and paramedics.”

Sussex Police said: “Police are investigating after a man was stabbed in Regency Square, Brighton, in the early hours of Saturday (5 March).

“Officers were called at around 1.15am after two men were seen fighting.

“The victim, a 26-year-old man from Brighton, suffered multiple stab wounds and was taken to hospital where he remains in a serious but stable condition.

“The suspect is believed to have run off down the west side of Regency Square towards the seafront. “He is described as a white man, thought to be in his twenties, about 5ft 7in and of slim build with brown hair. He was also wearing a black t-shirt which may have had ripped sleeves.”

Detective Inspector Ian Still said: “This was a violent but isolated attack in the city centre and we would like to hear from anyone who was in the area and who saw what happened.”