The founding member of one of Brighton’s best loved bands has sadly passed away. 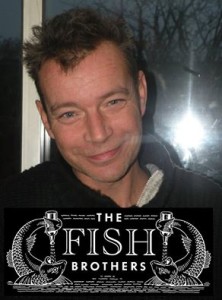 Dave Charnsworth, dubbed Chunky Dave by the band because of his wiry frame, was one of the original members of the Fish Brothers, who have been regaling the city with their unique brand of Vaudeville punk for almost three decades.

Although Dave left the band some time ago when he moved to France for a few years, the rest of the band kept in close touch, and announced the sad news on Monday.

“Without Chunky Dave there would never have been a Fish Brothers (yes, it’s his fault). Chunky had the old music hall record his Great Uncle Ken had given him, he had the guitar, and he had the washing up bowl that contained the lethal Fish Bowl cocktail. All these elements combined in Jersey Street on Muesli Mountain to spawn the Fish Brothers.

“We learnt our first set from that old record and 25-odd (sometimes very odd) years on we’re still playing them – Barsted King, She Was Poor But She Was Honest, Poor Young Girl, Little Shirt, Sweeney Todd, Winkle Song, Nine-Inch Nails, Grandpa’s Grave – we wrang the life out of that bit of vinyl.

“And Chunky (thus named by me due to his wiry, no-fat frame) was at the forefront as we started to write our own stuff. Ying Dicka Dicky, The Melk, Easily Better Than You, Things I Hate were all formed in his mischievous mind, I just added the Gumby words.

“I was his best man, he was mine and when he decided to move to France (where he formed a very successful covers band), he suggested Dan as his replacement and we’ve been together ever since.

“On his return he never harboured any grudge that we were carrying on without him, he just got on with bringing his boys up. I wish we could have got him up on stage with us more.

“I’ll remember him as a man of huge conviction, who was loyal, massively talented and could have the ladies swooning in the aisles (what is it about good-looking guitarists?)

“He was my best friend. I should have been there more for him. Thankfully I got to see him at hospital a few days before he passed away. I got to hold his hand, tell him I loved him and to say goodbye. My last image was of him putting his thumbs up as I left.

“In the words of the first Fish Brothers song I wrote and brought to the table, he will be way up in the stars having a pint and a smoke and a bloody good laugh. And heckling Elvis (which is another story). Miss you mate.”