The people who set a homeless man’s sleeping bag was alight as he lay inside it, leaving him with burns to his legs and feet, have been branded as “shameful and appalling”. 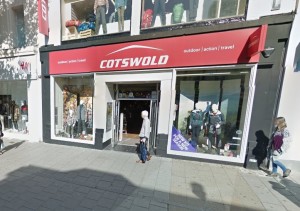 Police have launched an appeal for witnesses to the incident, which happened in the doorway of the Cotswold Outdoor Shop in Western Road at 2.12am on Monday.

East Sussex Fire and Rescue were called to a report of some burning cardboard in the doorway of Cotswold Outdoor shop in Western Road at 2.12am on Monday (7 March). They contacted police to say the fire was suspicious.

At 3.37am an ambulance crew reported that they had been called to a man in London Road who said he had suffered burns to his legs and feet after he woke up and his sleeping bag was on fire while sleeping in a doorway in Western Road.

The 39-year-old victim ran off and later called an ambulance. He was taken to the Royal Sussex County Hospital, Brighton, to be treated for his injuries.

Detective Sergeant James Meanwell said: “This was a nasty assault on a homeless man while he was sleeping. We would like to hear from anyone who
was in the area at the time or has any information to contact us or to speak to one of the city’s street team officers.”

The attack has also been condemned by council leader Warren Morgan, who said: “This is shameful and appalling – I hope someone will come forward with evidence that helps identify and prosecute the person that did this.”