A motorcyclist pursued by two police helicopters who broke “pretty much every traffic law” has managed to escape after crashing outside Churchill Square and fleeing on foot through the shopping centre. 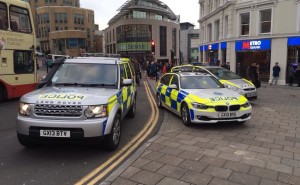 The police helicopter has been up above Worthing, Hove and Brighton today after it was scrambled in pursuit of a motorcycle being driven dangerously at speeds of more than 100mph at 3.40pm. 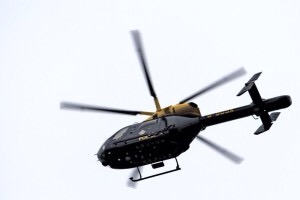 NPAS Redhill was called to assist in the pursuit, which started in Worthing – and it was later joined by NPAS Benson.

Adam Baker saw the bike racing through the city centre.

He said: “We nearly got run over by that idiot twice!

“Once crossing the road outside M&S, then half  later in The Lanes.

“The fella had no helmet on so everyone could see his face and he was riding a big bike up The Lanes – really dangerous!”

The suspect was first witnessed travelling at high speeds in numerous locations, including through built-up parts of Worthing and Brighton, for more than two hours.

He was initially spotted by police riding in excess of 100mph on the A24 southbound between Broadbridge Heath and Findon at about 2.37pm.

After circling the area, he crashed in Offington Drive, Worthing, at the junction of the A27 at about 3.40pm.

He then continued without his helmet in the direction of Durrington, before he returned to the A27 and travelled towards Shoreham.

A second helicopter was then sent to replace the previous one when in the Hove area.

The suspect was traced riding along Dyke Road Avenue, into Brighton city centre and down to Brighton Pier, before heading west to Portslade.

He then travelled along Western Road through Hove, and circled Brighton again before he crashed for a second time at the barriers to the Churchill Square car park at about 4.54pm.

From here, he is believed to have entered the shopping centre on foot, where he discarded a leather jacket, and exited out into the town centre.

Inspector Dave Frey said: “The suspect was riding with total disregard of his own safety and those of others – at excessive speeds, through red lights, manoeuvring around bollards onto the wrong side of the road, and onto pavements in town centres. He pretty much contravened every road traffic law and I’m thankful that no one was injured.

Police, including neighbourhood officers, searched the shopping centre and the town centre, and are reviewing CCTV with security staff.

The motorcycle, helmet and leather jacket have been recovered, and these will be forensically examined.

Inspector Frey said: “Following an hour-long search of the city centre, assigned officers were stood down, and an investigation is now underway to find and identify the suspect so we can put him before the courts.”