Moulsecoomb is raising a farewell glass to local vicar Father John Wall this evening (Friday 1 April) in the local that he helped to reopen.

Father John, vicar of Moulsecoomb and chaplain to the mayor of Brighton and Hove, is having his farewell drinks in the Bevy community pub. The mayor, Councillor Lynda Hyde, is expected to attend.

He said: “I’m moving on after over 10 years in Moulsecoomb, which will be a huge wrench. You only realise how deeply your roots go when you have to pull them up.”

Father John, 55, said: “I have loved being part of Moulsecoomb and its community, especially my involvement with getting the Bevy community pub going.” 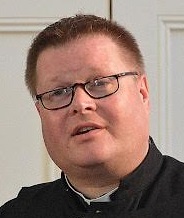 He also said how much he had enjoyed working with local schools and holiday clubs and hosting regular lunches for local community leaders.

He added: “I will miss the people enormously. Brighton will always feel like my real home, and I hope to come back one day.

He has also said prayers in the council chamber for two other mayors, Bill Randall and Denise Cobb.

He bowed out at the Brighton and Hove City Council meeting at Brighton Town Hall last week although he is expected to say prayers at the annual mayor-making on Thursday 12 May.

Father John said: “I have seen just how valuable the mayorality is to the city, a human face and personality for an institution that can feel quite impersonal.”

He spoke about his role as vicar of Moulsecoomb, chaplain to the mayor and Bevy pub supporter in an interview on The Vote on Latest TV last month.

Father John was born in London but brought up in the West Sussex village of Walberton.

He studied at York University where he graduated with a BA (Bachelor of Arts) in English literature and an MA (Master of Arts) in medieval studies.

He worked as auxiliary nurse at St Christopher’s Hospice, in Sydenham, south London, which he described as “testing my vocation to the priesthood”.

He then spent three years at theological college, St Stephen’s House, in Oxford, where he graduated with a BA in theology.

After being ordained in 1989, he was a curate in Ifield in Crawley where he spent five years. He became deputy vicar of Brighton for four years, at St Peter’s Church, then vicar of Wash Common in Newbury for seven years.

He is due to take his final service as the team rector of Moulsecoomb on Sunday (3 April). He looks after St Andrew’s Church, Moulsecoomb, the Holy Nativity, in Bevendean, and St Mary Magdalen, Coldean.

Father John is moving to Uckfield where he will replace Canon Martin Onions who died suddenly in May last year.

He will take up the post later this year after a four-month sabbatical in Rome and Venice where he plans to study art.

But he will be back in Brighton during May to be involved with the Brighton and Charleston festivals and the mayor-making.