The Greens made the case for staying in the European Union at an event on Brighton beach this morning (Saturday 2 April).

South East England MEP Keith Taylor, a former member of Brighton and Hove City Council, was joined by Brighton Pavilion MP Caroline Lucas and councillors and campaigners from across the area.

Dr Lucas, a Member of the European Parliament (MEP) before she was elected to the House of Commons, said that the Greens would be “loud and proud” in championing the case for Britain to remain in the EU. 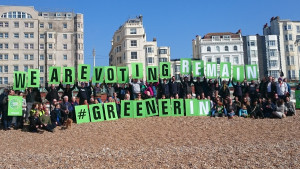 She said: “The Green Party has a unique voice in this debate. We’re going to run a bold, positive campaign in the south east that celebrates what the EU has delivered for the region.

“Here, and across the UK, Green supporters could tip the balance of a referendum that is likely to be very close and that’s why this campaign is so important.

“Not only has the EU brought us key environmental protections and rights at work but it’s been central to securing a lasting peace with this continent after centuries of conflict.”

Mr Taylor, who was in Falmer earlier this week meeting researchers at Brighton University’s state-of-the-art air pollution monitoring station, said: “I am campaigning for the south east to vote remain because I believe that the best way to tackle the collective challenges the UK and Europe face is to work together on shared solutions.

“Issues such as climate change, the health of our oceans and air pollution are particularly relevant here in the south east.

“Crucially, they are issues that show no respect for borders and require collaborative and co-operative solutions.” 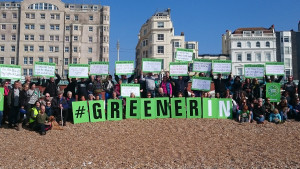 South East Green Party chairman Jonathan Essex, a councillor in Surrey, said: “The EU has done such a lot for us – protecting our air quality and cleaning up our beaches, supporting farmers and local businesses, providing funding for our beautiful landscapes and wildlife in the south east.”

Mr Taylor said that the latest statistics suggested that European investment in the region had supported 431 new jobs, improved the performance of 1,911 businesses and allowed 1,826 businesses to make financial savings from improved energy efficiency.

He said that it also helped 1,211 small and medium-sized businesses reduce energy, waste and water usage by 10 per cent and reduced overall CO2 emissions by 40,937 tonnes.

EU investment, he added, was worth a net £14 million to the regional economy.

Voting in the referendum on whether Britain should remain in or leave the EU is due to take place on Thursday 23 June.