The director of Brighton Fringe Festival says he has received threats, including some of violence, after a piece in which he admits he hates the Brighton Pier in its current form was published yesterday. 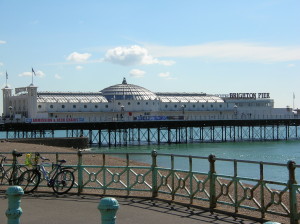 Julian Caddy said he had not realised he was sending his thoughts on the pier to the Argus, having mistaken the reporter’s name for someone else, and deeply regrets the offence caused.

In the original piece, Mr Caddy said the pier was a blot on the seafront which brings Brighton down, and compared its “tacky sideshows” unfavourably with the inland city’s creative industries, modern restaurants and a dynamic population

But posting on the People’s Republic of Brighton and Hove this afternoon, he says the aftermath has been the worst 24 hours of his life, and that he doesn’t hate the pier, but thinks it is “an iconic, vital part of what makes Brighton what it is.”

Mr Caddy said: “I deeply regret the offence caused. It would never and has never been the intention to cause offence. Brighton and Hove is a city that I love and have been brought up around.

My grandfather went to school here, as indeed did I for a time and I have given five years of my life to building up Brighton Fringe to being the festival that it is today.

“Hindsight is a wonderful thing though. As is rereading emails before sending them at 11.30pm on a Friday night, mistaking at the time just *which* Adrian you are sending it to who had asked for some comments on improving the pier, getting carried away but not checking properly or thinking it through, and then realising it was in fact to an Argus journalist and finding out early on Tuesday morning that not only has this gone into the Argus as an actual ‘piece’, it has gone on the front page and a double page spread with opinion pieces attached.

“I can’t actually even blame the Argus. I walked right into it and they, as journalists saw a story and ran with it. I wish I had had the chance to see it before it went out or even have prior warning of the prominence, but I guess that is their prerogative.

“The aftermath has been perhaps the worst 24 hours of my life and, on reading the pieces and opinion, it’s easy to see why. “What was I thinking?” Well I wish I knew.

“Also for the record the reference to Primark, Sports Direct and coaches was entirely directed at the thousands of teenage foreign students that pass my window between their visit to the Pavilion, those shops, on their way to the pier and back to their coaches, not as some snobbish reference, more to direct attention to the day-tripper market being dominant, rather than somewhere that more local residents might wish to go to on a regular basis.

“I also wish I hadn’t said the M word for a restaurant- just somewhere nice to eat on the pier would be amazing. I’ve never even ever been to a Michelin star restaurant. Basically more diverse attractions to get even more people than currently go.

“I really, truly, don’t hate the pier- it is an iconic, vital part of what makes Brighton what it is and I have worked my arse off for the past five years here. I’m completely invested in this place and care passionately about its past, present and future.

“Yes, I happen to live in London, but that should not exclude me from having a view. I have been dealing with the inevitable feedback, some threatening actual physical violence, all day and night yesterday, some with the frankly disturbing “f*** off back to London”.

“I’ve learned my lesson for sure and apologise profoundly for the offence caused. What is more, running a festival like Brighton Fringe, the very last thing that I would ever wish to do is create divisions and that is exactly what has happened, and how. Brighton Fringe as it’s open-access is, literally, all about inclusiveness and being as welcoming as possible and to go against that is absolutely unthinkable.

“I’ve been working at in fringe festivals for over 20 years now and believe me, it’s anything but Michelin star restaurants and poshness, so to come across like that (“a typical view from an elitist London a-hole” and similar) is dreadful.

“I don’t know what more I can do than say this- and to get it out to as many people as possible. Not everyone will want to hear it, and that is fine.

“What was written in the paper was appalling and I’d probably have the same view if I’d read them myself.

“This year we are launching the Fringe with fireworks and I seem to have started an uncontrollable fire before it has even begun and for that, I am deeply sorry.”