Brighton and Hove Buses has launched a full investigation into how a cyclist crashed with a bus on the Lewes Road last night. 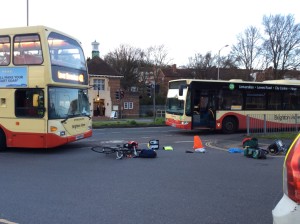 The cyclist, a 23-year-old Brighton man, was rushed to hospital with leg and head injuries after the crash at 7.10pm last night.

It appeared to have happened as the 48 bus was turning right into The Avenue, crossing the southbound lane of the Lewes Road, along which the cyclist was travelling. The bus’s windscreen was smashed and the bike was thrown into The Avenue.

A 25 bendy bus had also stopped at the scene.

“A man aged in his 20s suffering from hip and leg pain and a bump to his forehead.  He was taken as a prioiry to the Royal Sussex. He was conscious throughout but his consciousness levels had fallen slightly when he left for hospital.”

A police spokeswoman said: “Emergency services were called to a report of a cyclist being in collision with a bus in Lewes Road, Brighton, at 7.10pm on Tuesday (12 April).

“The cyclist, a 23-year-old Brighton man, was taken to the Royal Sussex County Hospital, Brighton, suffering from leg and head injuries. The southbound lane of Lewes Road was blocked for a while. No else was hurt.”

A spokeswoman for Brighton and Hove Buses said: “We’re currently carrying out a full investigation.”