Blind and partially sighted children in Brighton and Hove can now enjoy a range of specialised braille and large print books in city libraries. 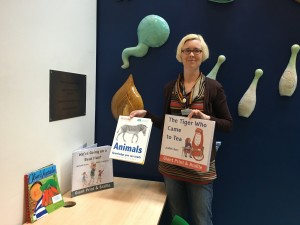 From this month, Jubilee and Hove libraries are stocking the first-of-their-kind books created by publishers for pre-school readers.

Stock librarian Stephanie Coates, who oversaw the introduction of the books said: “We are really pleased with the quality of the products, they are really beautiful books.

“All the images in the books are tactile so there’s more sensory aspects children can enjoy other than just reading the braille.”

Previously, the library had a limited range of books for blind readers, often aimed at older children or a braille accompanying text rather than a book in itself.

“They can be used in two ways, either for children learning braille while an adult reads aloud, or for visually impaired parents and grandparents to read to their children.”

The titles include publications from the new DK Braille series and access2books, a charity who specialise in printing early years’ books in the dual format of giant print and braille.

Both libraries currently have a small selection on the shelves and will be adding more over the coming months as they are released by publishers.