The future of Brighton’s “ugliest roundabout” is looking brighter after its owners, Highways England, told the council it wants to start discussions about how to improve it. 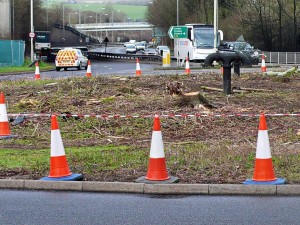 Bushes on the roundabout on the A23 as you come into Brighton were hacked down to leave a wasteland for safety reasons back in January, to the horror of Patcham residents.

Ward councillors publicly condemned the move back in March – and now Highways England has told the council it wants to talk about its future.

Ward councillor Lee Wares said “An opportunity exists for the ugliest roundabout in Sussex to be transformed into something more stunning that reflects the nature of our great city and we are urging the Labour administration to grasp it with both hands.

“Of course there will be constraints and regulations to abide by but why not, for example, hold a competition for the children of our city to produce ideas to express what they think Brighton and Hove means to them?

“So much emphasis is placed on public art and displays in the city and making our seafront attractive and quite rightly so but, let’s begin the experience here in Patcham.”

Cllr Geoffrey Theobald said: “Hundreds of thousands of people pass this roundabout and I would hope that Highways England would agree to sponsors for the site to help fund something exciting and imaginative.

“We should not let this opportunity pass us by and end up with a wasteland covered in weeds or a few shrubs.”