Albion will play Championship level football next season after they drew 1-1 with Sheffield Wednesday in their play-off semi-final second leg at the Amex, losing 1-3 on aggregate.

But the atmosphere generated by the 27,000-plus crowd was sensational. 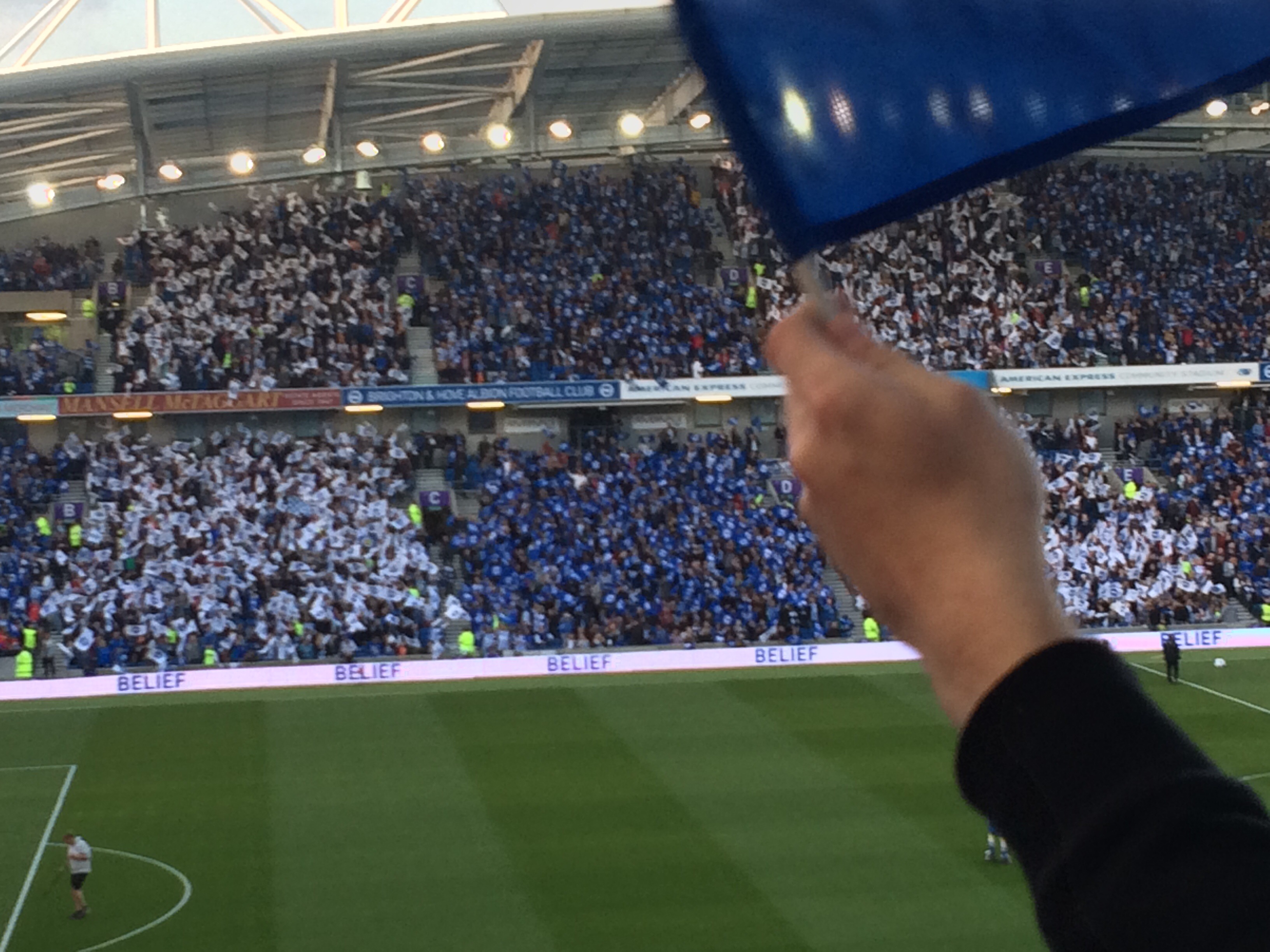 Both Anthony Knockaert and Steve Sidwell were fit to start as Albion bolted out of the traps and a wall of noise greeted every attack.

Albion players were fighting for every ball with Jiri Skalak and Knockaert heavily involved.

Albion’s first chance came from a Knockaert free kick which hit the post and bounced along the goal line to safety.

Albion really had their tails up. Knockaert set up James Wilson who just failed to get his shot away.

The Seagulls were winning more than their fair share of dangerous free kicks. Another from Knockaert was hit low under the wall but Owls keeper Kieran Westwood was equal to it.

The wall of noise from Albion and Owls supporters was relentless.

It was certainly the Knockaert show as he took a pass from Steve Sidwell that was deflected just over by Wednesday defender Glenn Loovens.

Sam Baldock then got in on the act forcing a great save from Westwood as he bundled his way into the penalty area.

Then Albion almost broke through. A Skalak cross flicked on by Wilson was headed agonisingly wide by Knockaert from six yards.

Bruno won a free kick just outside the Owls’ penalty area. Knockaert clipped it in from the right and Lewis Dunk fired the the ball into the roof of the net to put Albion in front and one behind on aggregate.

But the Seagulls, after all their efforts, seemed to take their foot off the gas a little.

Albion gave away possession too often and, as Gordon Greer hoofed a ball clear, it fell to Ross Wallace. His cross went straight over Lewis Dunk and Greer’s head and past a rather flat-footed David Stockdale. In fairness, before this Stockdale had virtually nothing to do.

Dunk insisted he was fouled as he challenged by Gary Hooper and chased the linesman back to the centre circle. But the goal stood.

This blew the wind out of the sails of Albion players and fans alike.

Wilson had another chance after good work by Sidwell but Westwood smothered it.

Beram Kayal and Sidwell still had a good grip on midfield as they looked to get Albion’s high tempo attack back on track.

As the Seagulls regrouped a Skalal free kick fizzed over the bar from 20 yards out.

The last action of the first half saw Stockdale make a superb one-handed save from Hooper as the Owls tried to put the game to bed.

Early in the second half Stockdale spilt a shot from Barry Bannen that Gaetan Bong then miskicked but the ball went to safety.

Kazenga LuaLua replaced Baldock as Skalak went into the middle but Albion were running out of ideas even though their tempo and possession remained high.

Wilson had a couple of shots well saved by Westwood.

Then a gamble by Hughton. Greer was replaced by Liam Rosenior, Dunk went up front and Albion went to three at the back.

Almost 12 years previously Adam Virgo got that famous equaliser as he went up from centre half against Swindon at Withdean in a play-off match.

Kayal was lucky to stay on after two rash tackles in quick succession.

Dunk was putting himself about but Albion just couldn’t get the ball to him and time was running out.

Albion were still winning dangerous free kicks but nothing was getting through.

Wilson had one last clear chance. But Westwood pulled off a great save low to his left.

Stockdale came up for a few late free kicks and corners and nearly got caught out as he had to sprint back as Wednesday broke.

But even with six minutes of added time Albion couldn’t find another opening.

At the end a few of the Albion players looked crestfallen as they did a well received lap of honour. 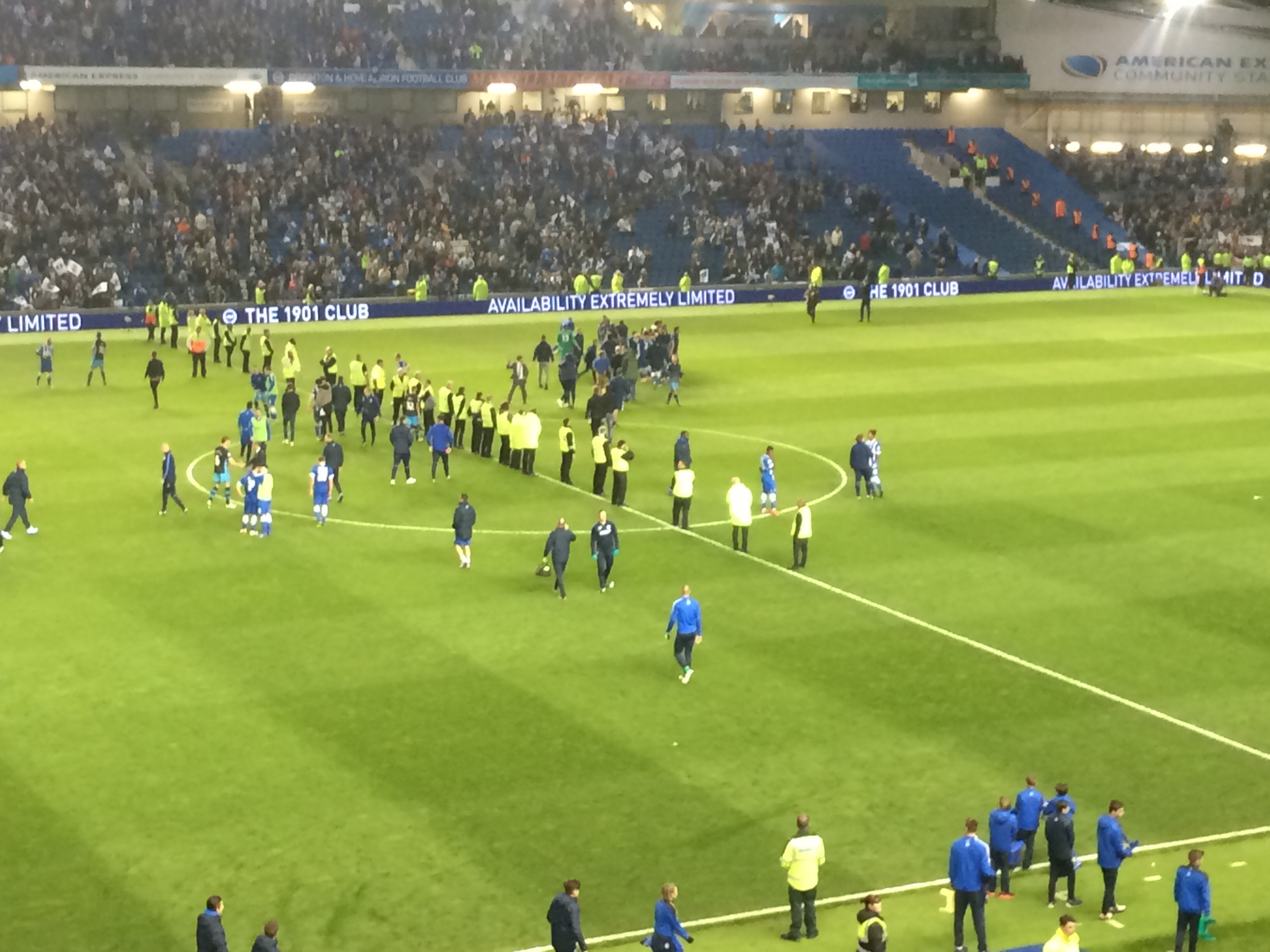 Now the Seagulls must try to keep hold of Hughton, Knockaert and Kayal and go again next season in their quest for the Premier League.

It’s bound to happen one day.