A group set up to give prevaricating Brighton writers a friendly kick up the backside has been given an Arts Council England grant to help develop a series of online courses. 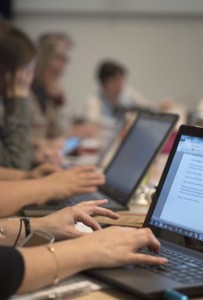 Writers HQ, which was set up in Brighton by Sarah Lewis in 2012, will use the money to develop courses guiding writers through the whole process of writing a novel, from the first idea to getting the first draft on paper.

And the grant money will also allow the company to give five people full access to all the courses for a year.

Sarah Lewis, who has now teamed up with award-winning novelist Jo Gatford and expanded the business to Worthing, said: “The courses are designed to be done in the short chunks of time that most of us have to work with, will be affordable, and presented in the practical, hands-on, productivity-driven, stop effing about WHQ styleee.

“Also coming your way will be: online communities, beta reading help, shoulders to cry on and so much tea we’re buying stocks in PG Tips.”

Writers who have attended Writers HQ courses have produced more than 30,000 words between them during the sessions. Jo Gatford has been published, Alexa Radcliffe-Hart’s collection of short stories is out in August, and Paul Macauley has two plays at the 2016 Brighton Fringe.

Meanwhile, since the courses started Sarah Lewis has been named one of the NWS10 talented early career writers, and gained a rarely given special mention in the BBC Short Story Award.

Jo added: “This grant gives us the opportunity to develop and share the things we’ve learned about being productive and creative in among the general chaos of life, and bring a huge gang of buddies along with us on the writingy journey. We cannot wait.”