A Brighton woman who lost her distinctive yellow bag when a stranger with an identical bag took it from the train they were both on managed to track it down against the odds. 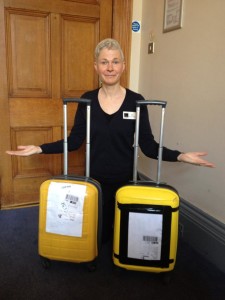 Ali Hendry-Ballard stashed the canary-yellow shopper, which contained smart clothes and notes for the corporate training session she was due to give the following day, on the train from Milton Keynes where she had just run a half marathon.

She got off the train and made her way to the hotel looking forward to showering and changing into fresh clothes – but to her dismay, when she opened the bag, it was full of trendy teenagers’ clothes and A-Level notes.

A spot of playing detective and six degrees of separation on Facebook later, she had tracked down the owner and a couple of days later the bags were soon swapped back via courier.

But not before Ali had to carry out the training wearing the teen’s trendy clothes – and her battered running shoes.

Ali said: “At the hotel, I unzipped my distinctive yellow wheely bag and found it full of A-Level notes and trendy clothes. I closed it again, wondering if I was hallucinating from tiredness. I opened it again but the contents stubbornly remained!

“Reflecting over my journey, on the first train I was asked by the guard to put my bag in the luggage compartment. I always keep it tucked by my side but I conceded and he helpfully stowed it away for me, off down the corridor out of my eyeline.

“At the station I was one of the last to get off the train and my bag was right at the back of the bottom shelf. Only it wasn’t my bag. Someone else had taken my bag not knowing there was another one exactly the same, out of sight.

“I tentatively rummaged through the bag and found an exam paper with the owner’s name, DOB and school. She lived in North Wales, over 200 miles from the hotel room floor where I currently sat, bemused. I looked down at my tired running gear and wondered what tomorrow’s delegates would think of my attire.

“But I live by ‘everything is solvable’ so I set about calling various lost baggage numbers and completed some online forms. Then I turned to social media and posted the owner’s details. Four hours later and over 150 shares I got her mum’s phone number!

“The partner of a friend of mine had gone to a wedding and got chatting to a woman. The woman had a teenage daughter who was in the same class as the bag’s owner. What are the chances? High, it would seem, according to my experience.

“The mum and I chatted like old friends and she offered her daughter’s clothes. As it turned out there were trousers and a shirt that fit me. Wearing clothes belonging to someone 30 years my junior was not something I saw myself ever doing, but that’s exactly what happened the next day. The only anomaly was my shoes – scuffed up Saucony running shoes. Well, it’s a look.

“After wrangling with a couple of delivery companies the two bags were finally returned to their rightful owners two days later and I am now planning a trip to North Wales to meet the family.”

Ali was running the Milton Keynes half marathon on behalf of Chestnut Tree Children’s Hospice. She is still raising money for that and another race, the Worthing 10k in June.