An elderly man died this afternoon after collapsing at a bus stop on the Level, sparking a medical emergency which saw roads closed for up to an hour.

London Road and the roads around the Open Market were closed by police this lunchtime as emergency services dealt with the incident. 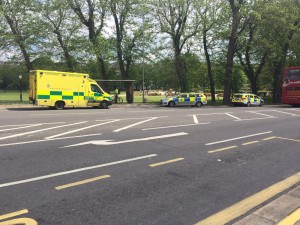 Sadly, despite the best efforts of paramedics, the man did not survive.

A spokesman for South East Coast Ambulance Service said: “We were called shortly before 1.15pm today to the Open Market entrance to The Level to reports a man had collapsed. Ambulance crews in two ambulances and two cars attended the scene.

“Sadly attempts to resuscitate the man were unsuccessful and he sadly died at the scene.

A police spokeswoman said: “Emergency services were called to the Open Market in Brighton at 1.25pm to a medical emergency.

“A man, believed to be in 70s, had possibly suffered a cardiac arrest. There are no suspicious circumstances.”

Three police cars, two ambulances and two paramedic cars were on hand by the stop opposite the Open Market as the road was closed.

At 2.10pm, Brighton and Hove Buses tweeted that no buses were able to serve the Open Market, London Road Shops or St Peter’s Church as a result. By 2.37pm, it said all routes were operating normally again.

Wanted man may be in Brighton, police warn