A Brighton woman is to cycle 400 miles in four countries in four days for charity just four weeks after getting a bike.

Jackie Ashwood is one of two members of Domestic and General staff taking part in the ride on a bike donated by Brighton bike shop Evans Cycles.

She will be starting from the Olympic Park Velodrome, having been supported by her colleague and fitness fanatic Steve Mcmenamin.

Ms Ashwood has undergone intensive training and a crash course in how to ride long-distance as she raises money for young people’s charity The Mix. 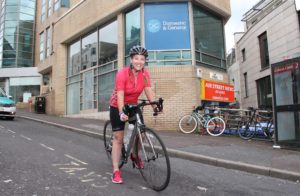 She said: “Not only did I not own a bike until a few of weeks ago, I hadn’t ridden a bike for years. But it’s true what they say – you never forget.

“I’m over the moon Evans has given me a bike. As well as wanting to do something good for charity I think they might have felt a bit sorry for me and my lack of experience on two wheels.”

The Mix, formerly known as Get Connected, is a nationwide free and confidential helpline service for young people.

Each year the charity supports at least 250,000 young people to find the help they needed with a range of issues such as homelessness, self-harm, bullying and drugs.

More than 80 per cent of those who have used the helpline say their lives improved after contacting the charity.

Domestic and General, which has offices in Queen Square, Brighton, has raised £140,000 for The Mix.

The charity gifted two places on its annual Ride 999 event to D&G in thanks for the company’s support over the past year. 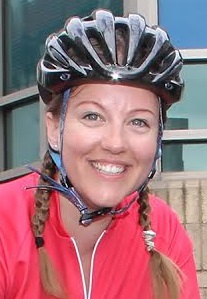 Ms Ashwood will be joined on the challenge by a colleague from the D&G’s Wimbledon office.

Chris Martin, chief executive of The Mix, said: “Domestic and General has been hugely supportive of The Mix throughout our year-long partnership.

“It’s incredible that the dedicated staff have raised £140,000 to support our essential work. This year we have reached 1.7 million under-25s through our helpline, counselling and digital services. Next year we hope to reach two million. This donation will help us achieve that.”

Volunteers will give up the Whitsun bank holiday weekend to cycle across Europe and raise additional funds.

Ms Ashwood has singlehandedly raised more than £2,000 and is asking for the support of the people of Brighton and Hove to help reach her stretch target of £3,000.