The footballer who scored three goals to help England to World Cup victory 50 years ago helped a Brighton charity net £38,500 at a fundraising lunch.

Hat-trick hero Sir Geoff Hurst entertained almost 500 guests from the business community at the lunch at the Grand hotel on behalf of the Rockinghorse children’s charity.

Sir Geoff stepped in for his 1966 team-mate Gordon Banks who had been due to attend the “Best of British” sporting lunch but was unable to make it for health reasons. 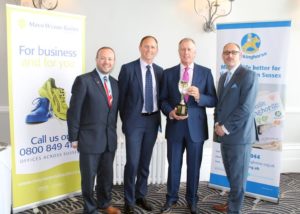 Funds raised from the Best of British event are supporting the charity’s annual Summer of Sport initiative, which this year is providing activities and leisure opportunities for local young people suffering from mental health problems.

“While we very much continue to service these areas robustly, we are becoming far more acutely aware of the importance surrounding the support of children and young people with complex mental health issues right here in Sussex.”

A charity raffle and auction were held during the lunch. The prizes and lots included a signed Lionel Messi boot, a 1966 World Cup winning England shirt signed by 10 of the 11 starting players, plus a very special limited edition piece of artwork entitled “The Greatest Save”.

The artwork, signed by both Pelé and Gordon Banks, was donated by Castle Fine Art Gallery in Brighton and fetched £2,300 at auction.

“He has been suffering from kidney cancer for the past couple of years and our guests began the day with a very respectful show of support for Mr Banks with a heartfelt moment’s applause.

“Our Best of British guests never fail to give generously and the money raised will continue the work of Rockinghorse as it looks to celebrate its own golden jubilee next year, having helped tens of thousands of Sussex children lead better and healthier lives.”

Rockinghorse is the official fundraising arm of the Royal Alexandra Children’s Hospital in Brighton, and a vital supporter of the neighbouring Trevor Mann Baby Unit and its sister site, the Special Care Baby Unit in Haywards Heath.

The charity raises money for life-saving and cutting-edge medical equipment while ensuring that children are treated in an environment better suited to their needs.

To find out more, visit www.rockinghorse.org.uk.

Another student house must be converted back to family use