Planners have approved 28 new homes on the site of an old council children’s home in Preston Road, Brighton.

Housing association Southern wants to replace a 1950s link building between the two existing Victorian villas and turn the complex as a whole into 22 flats. The flats will have one and two bedrooms and two of the ground-floor flats will be wheelchair-accessible.

Southern also plans to build a terrace of six two-storey houses at the rear of the site, with three bedrooms each.

Forty per cent – or 11 – of the new homes will be classed as “affordable”, with eight of those for rent and three for shared ownership.

A similar but slightly larger scheme was turned down last year but Brighton firm Yelo Architects drew up what one councillor, Phélim Mac Cafferty, described today (Wednesday 8 June) as “a much more sensitive” scheme. 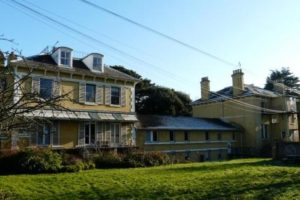 Another councillor, Carol Theobald, told fellow planners during a meeting at Portslade Town Hall: “This is a great improvement.”

Councillor Julie Cattell, who chairs the Brighton and Hove City Council Planning Committee, praised the applicant and architects for working with the planners on the revised scheme.

Southern said that it hoped to start work on the site as soon as possible and hopefully by the end of the year. The housing association hopes to complete the project by early 2018.

It will give the council money, known as section 106 money, to compensate for the impacts of the scheme.

Southern has been asked for almost £52,000 towards open spaces and recreation, including £12,500 indoor sport. Preston Park, the Withdean Sports Complex, the Prince Regent Swimming Complex, Dyke Road and Blakers Park have all been suggested as possible beneficiaries.

A contribution of £17,500 is expected to fund a bus shelter and real-time information monitor at the bus stop outside the site as well as conditions for pedestrians at the rear.

Southern will pay £14,000 towards the council’s Local Employment Scheme. It has also committed to at least 20 per cent of the workers employed during the demolition and construction phase being from the local area.

It will also pay almost £53,000 towards providing primary and secondary school infrastructure.